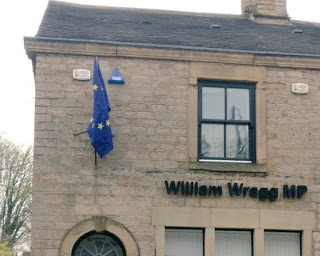 A mate who works for an MP told me over a drink the other day how much anger he gets whenever he picks up the phone. Over Brexit? I asked. "Everything," he said. Housing, parking, fly tipping, schools, cuts, immigration, everything you can think of, and plenty more you couldn't.

I'm also reading Isabel Hardman's excellent book Why We Get The Wrong Politicians - a well written and incisive gallop through the problems of our failing political system. Politics is broken, but there is still much virtue in the intentions of people who work for our politicians, as well as among the much maligned political class too.

With that in mind, I popped into the office of William Wragg MP in Marple this afternoon. I thanked his staff for all they do, keeping democracy ticking over in the best way they can. They'd arrived at work recently to find that someone had stuck Bollocks to Brexit stickers all over the windows. At best that's a pain the backside and it will have taken them a while to scrape them off, distracting them from whatever else they do. At worst it must be very unsettling in the current climate. I made the point that I fully support the views of the people who want to resist this insane Brexit and that I'm massively disappointed in William's stance on this issue, but I'm sorry for the inconvenience that this has put his staff through. They seemed OK, and grateful of a visitor who didn't want to fight.

I did so also because I did "like" a tweet that pointed out the sticker stunt, but more so because whoever did it also hung an EU flag from the sign above the door. I thought that was funny. There has to be space to disagree well, not to escalate every slight and every action into a massive outrage on social media. But these are angry, edgy times.
Posted by Michael Taylor at 2:22 pm