The best food in Stockport 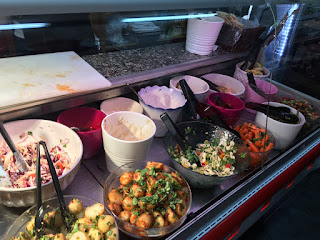 Like most people who live in the outlying areas of Stockport, we don't actually go into the town centre that much. Frankly, there's very little reason to.

When we do it's for a very specific purpose, a particular shop, or the excellent Light Cinema. In fact, that is an example of a building that is so much better from the inside than the hideous carbuncle of an exterior. I'd go so far as to say it's the best cinema I've ever been to.

We popped in to Stockport today to drop Louis at work and thought we'd check out the new Produce Hall and the work that's been done to the area around the market. It has definitely improved. Today being Monday, everywhere was closed, so we'll have to have another go later in the week. But from a pure place making perspective, the progress is really noticable and we've seen enough to make us want to come back. 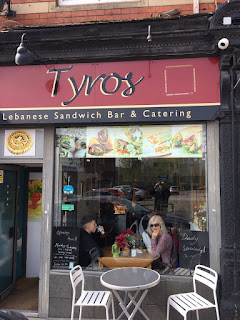 What it did do however was send our fizzing tastebuds in the direction of Tyros, a sensational Lebanese cafe tucked away just off Tiviot Dale.

All three of us had wraps, lamb and two kinds of chicken. The salad extras are something else though; carrots, potato salads, possibly the best hummus outside of the Middle East. The service is not just friendly, but really enthusiastic for food, the love oozes out. And it's just such good value too - £5.50 for a wrap and two sides is incredible, really.

One fabulous previous visit was to treat Paul Lawrence before he left Stockport for a new job in Edinburgh. Paul is someone with real vision and a sense of how to build a place and all the good things now happening were started on his watch.

I've heard great things about Where The Light Gets In, but also that it's a lot of money for something I probably wouldn't appreciate. I like my food, but my palate isn't delicate, my choices unrefined. I value hearty every time.

So, there's more exploring to do, but when it comes to the town centre, I'll reserve a verdict on the Produce Hall for another day, because I've had it confirmed for now that Tyros remains the best food in Stockport town centre.
Posted by Michael Taylor at 1:32 pm