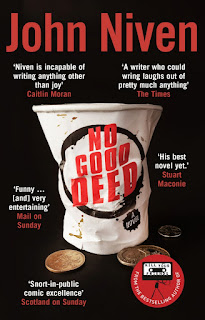 I can't believe it's been over four years since I last read and reviewed John Niven's Single White Male, his more thoughtful, though no less observant follow up to the debauchery of Kill Your Friends. Such was the familiarity and accessiblity of his writing that it felt like getting back in touch with an old pal.

Well, not quite a reunion with the sting in the tale of his latest book, No Good Deed. Writer Alan Grainger bumps into Craig Carmichael on the streets of Soho. Homeless and hopeless after blowing his success as a rock musician his life is in contrast to Alan, who has done OK for himself in a profession where luck has as much to do with it as talent. Slowly, the hierarchies of their childhood days in Ayrshire emerge, eventually and literally floating to the surface from the deepest wells of a badly cared for septic tank. Close behind is Craig's capacity for destruction, though not just his but that of Alan and all he holds dear.

It's a painful and troubling tale, a reminder why I have a feeling in my own sensitive bowel at the thought of school re-unions, but also feel extremely blessed to have the friends I have.

I've had my Niven itch scratched recently with my belated discovery of Chris Brookmyre. But as I said four years ago, about his last book, this is his best book yet and evidence of a writer getting better and better.
Posted by Marpleleaf at 3:27 pm