A holiday in Estonia - where people dress in black 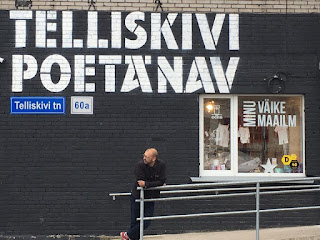 I don't think I've sat in a political conference before, enjoyed listening to a speaker and thought 'I'd like to go there on holiday'. But it was listening to Arto Aas, an Estonian MP and former minister, that sparked a real interest in the former Soviet state.

Arto was speaking at Andy Burnham's Digital Summit in Manchester last December, a really stimulating conference full of ideas and smart thinkers. A local Manchester perspective from Chris Maguire and a more political take from Richard Angell both conveyed very well the energy generated by his talk and huge interest in Estonia that Arto sparked.

It was good to get a perspective from someone from somewhere with such ambition. Since the break-up of the Soviet Union, Estonia has forged a completely new identity, joining the European Union and NATO, building stronger links with the Nordic countries and making a giant leap forward towards being a modern digital state.

I had a vague idea I'd be able to replicate our tour of western European cities last summer, by zipping through the Baltic states. Unfortunately it isn't as simple as that, as Matthew Engel explained in his Estonian odyssey as part of his excellent tour of Europe series for the New Statesman. The trains between the Baltic states are still Soviet-era, and the flights from the North of England are pretty much non-existent. If you think about it, there are vanishingly few reasons to do so: Tallinn has taken itself off the stag circuit and precious few Estonians have sought the path to a 'better life' in Britain. Instead we flew to Helsinki - itself a great city to visit and spend a day or two - then caught a ferry across the Baltic. It was all pretty seamless, technically and culturally, the people looked similar and had a cool and precise aura. I’ve thought that too when I’ve met visiting delegations of FinTech specialists from Nordic countries in Manchester. I can tell the Finns and Estonians from the Swedes and Danes. And between the cities, there was less of a difference the two than between ,say, Manchester and Edinburgh, or London.

Flaneuring around the old part of Tallinn was great. There were loads of groovy coffee shops, quirky museums and cute squares to hang out in. I was gutted the Museum of the Occupations was closed for refurbishment when we were there, and it’s almost a reason to return another time. The national museum of Estonia placed it all in a long context, but the former KGB cells were a brutal reminder of how much Estonia's history is tortured and steeped in suffering.Yet the character of confidence and fierce pride now is all the more remarkable.

For me the highlight was the Telleskivi part of the city (pictured), a collection of refurbished warehouses and railways sheds, populated with food stalls, a market and funky offices for tech start-ups. It was like Manchester’s Sharp Project, with a Borough Market and an Affleck’s. But the vibe had something more than just a hipster hangout; Estonia is also a deadly serious place for business. Skype was invented there and the profits from the sale invested in Estonia’s latent venture capital industry.

Culturally, we saw the spaces where the Estonians love to gather and sing, but not any actual singing. Our time there coincided with the World Cup, so I watched England beat Colombia in a hotel with my non-football supporting son who had more in common with the rest of the residents - marked indifference. So go, take it in. One of most intriguing places I've been to, in turn both inspirational and modest. Not only a brave country with a tough past, but somewhere with such a bold grasp of the future.
Posted by Marpleleaf at 8:43 pm