Great start from Blackburn Rovers. Off the pitch, not so good 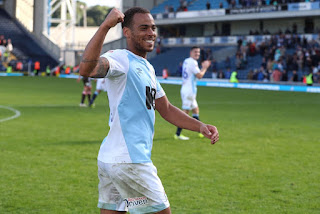 Des Lynam used to refuse to show the league tables on BBC's Grandstand until 5 games had been played. Given what happened to Blackburn Rovers last season, I've waited until this point in the season before blogging my rash predictions and barely formed observations.

So, five games, fifth in the table, two wins and unbeaten and still in the League Cup. By any measure, that's a great start. You can read Blue Eyed Boy and his loan signing Old Blackburnian for a peerless observation on the start, here. But there's something more.

There's a reason Championship players get loaned out to League One clubs. One of the phrases used in such circumstances is to 'toughen them up' get them game time in a hard physical environment. When it goes well, they return as better players and perform accordingly. Braver, stronger, fitter and with a hunger never to have to go back to all of that.

It feels like the whole club has been on loan and come back so much better. Even the fans seem to be part of that renaissance. It's what led me to make the optimistic prediction on the BRFCS podcast that we'd finish eighth and that Bradley Dack would light up this division.

Denied the magic of Dack for two of the games I've seen, I'm sticking to that. But then without the pace of Armstrong and the determination of Samuel to make the best of his opportunity, our expectations were pretty low for the visit of Brentford, a side beloved of footballing purists.

Tony Mowbray studies the opposition carefully. At times last season I was critical of the excess of respect I thought he showed to visiting teams. But his change of gameplan for the visit of Brentford paid off. Kevin Gallagher on BBC Radio Lancashire called it winning ugly. I don't. I call it winning effectively. I don't regard tracking back 50 yards, fierce tackling and pressing the goalkeeper as ugly. Mowbray's too much of a gentleman to say it in public, but I'd be pretty sure he told his charges that Brentford were a decent footballing side, but they don't like it up 'em. They were the softest team we've played in ages. The fact they conceded free kicks and got the only yellow card of the game was for frustrated niggling acts of cowardly shithousery, because they knew they were no physical match for Evans, Smallwood, Bennett and the massively impressive Rothwell.

And the fans, going in 2-0 down against Reading? Applause and patience. And at the final whistle after the draws with Millwall and Reading? Acknowledgement of decent performances.

The summer signings seem good, especially Rothwell who I really like. I wasn't thrilled at the recruitment of Jack Rodwell, and not just because I'm going to get them mixed up, but because of the bad taste of what happened at Sunderland. The manager cherishes the positive balance in the dressing room, hopefully he thinks Rodwell will be improved by that and everyone else will benefit as a result. But we're going to have to trust that Mowbray knows what he's doing.

Anyway, so far so good, but I didn't start blogging just to say how great everything is. I'm not happy about a few other developments at Ewood in the close season.

We are a ridiculously leaky club. Mowbray is annoyed at this. And it possibly contributes to deals falling over and prices going up.

The transfer business always seems too close to the wire.

I don't like that the half time scoreboard and announcer named two teams in our division as Sheffield and Sheffield. Sloppy.

I don't like being sponsored by a betting company.

I really disliked the dazzling bright LED advertising board, especially as it was punting yet more betting.

And the rest of the static ads, more betting, more junk food and, inexplicably, a vaping company.

Who do the commercial staff talk to? Do they just walk down a run down high street and seek out all those tatty peddlers of crap that contribute to the blight of modern life and the poor health outcomes it encourages.

Why not partnership with Community Clothing? Why haven't bridges been built with WEC? or Crown Paints? or Blackburn's wider efforts at civic renewal, instead of taking money from those who so cynically extract it from the pockets of those who can least afford it?

But, overall, this has been a great start and it's terrific to have adapted to life back in the Championship with less pain than we seemed to have adjusted to League One this time last year. What a difference a year makes.

Posted by Marpleleaf at 3:47 pm