The road to being Wigan's peers - the BRFCS podcast 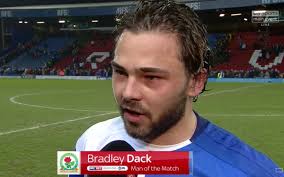 We recorded a podcast after the Wigan game, where I hope we got across how most fans are feeling after the draw at home to our promotion rivals. When our second goal went in it truly felt like we were the invincibles, guided by the magician that is Bradley Dack. When Wigan's second bobbled in it started to feel like a defeat.  I still think we'll go up, probably in second spot though. I'd much rather have the points in the bag now than the games in hand.

The other positive I'll take from the game is that we have for the first time since 1996, or maybe 2001, the best player in the division playing for us. Dack is fantastic to watch: brave, tricky, generous and remarkably honest. I've never seen a player get fouled so much, but he always tries to stay on his feet.

These podcasts are great fun. Ian Herbert puts in great effort to make them a cut above what most people would expect from a fans ramble. Please share widely and give us a rating.
Posted by Michael Taylor at 8:48 am