My Manchester - remarkable photographs from the 1980s 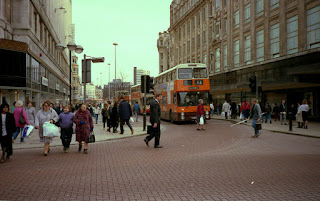 Manchester Confidential have produced a remarkable photo gallery of Manchester in the 1980s. There are tinges of glamour and a slight fizz of action revealed within them, but on the whole they stand as a record now for how much the city has changed for the better.

The commentary alongside from the peerless Jonathan Schofield also captures the time remarkably well. It was the Manchester I fell in love with in the 80s. The city I chose over all others to come and study and eventually to return to twelve years later. I'm still now.

Jonathan quotes one writer Charles Jencks who viewed that older city: 'Look again at those buildings. As examples of frozen energy they fill you with amazement. Some Mancunians must have been giants. What dreams did those people have? And do they still have them?'
Posted by Michael Taylor at 9:04 am