Albania, Albania, not nearly as repressive as Romania 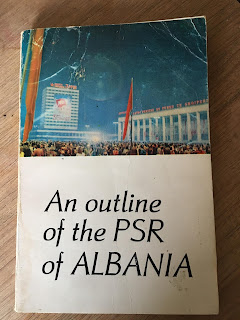 Last year I heard Robert Elms eulogising and reminiscing about the Albanian Shop on Betterton Street in Covent Garden on his own Listed Londonder slot on BBC Radio London. It's always worth a listen to a historical and socially curious podcast, but it still surprised me that with his intimate knowledge of London’s nooks and crannies that he would have been drawn to somewhere familiar to me.

My own interest was that I visited the shop in 1983 as a diversion from a school trip, where as an accompanying sixth-former, I was allowed to do my own thing, which was supposedly to visit the British Museum. I was mildly obsessed by this secretive closed Stalinist society back then. If I remember rightly I bought a wildly hyperbolic history of Albania (which I still have, left), an enamel badge and a small silk flag (which I don't), I also acquired some free Albanian produce - tomato puree, pickles - none of which were ever consumed. 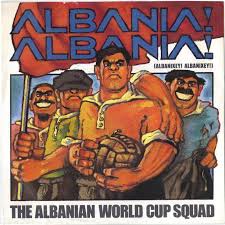 I do have a vivid recall of my teachers looking at me with a mix of bewilderment and fear when I told them what I'd disappeared to do.

The root of this teenage fixation may have been Alexi Sayle who recorded the Albanian World Cup Squad's official song for the 1982 World Cup. At the time oppressive Stalinism was still a bit of a joke. Albania an entire mystery, but Sayle at least was speaking from experience having been taken Eastwards on holiday by his communist parents.

The other day I wandered down Betterton Street and couldn't quite place where it was, and what is there now.  It's another symbol of London's quirkiness that it has probably lost forever. Not just the shop, a Cold War relic, but that anyone could sustain an eccentric enterprise amidst such sky land prices now.
Posted by Michael Taylor at 8:43 am