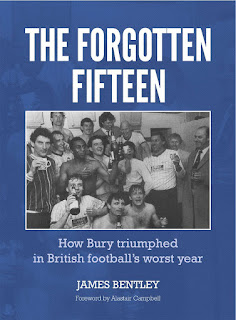 Honestly? It was a poor game on Saturday at Gigg Lane, Bury. After everything we've been through I should learn to celebrate our wins with more enthusiasm. I was genuinely pleased we won, and with three really good goals as well and a clean sheet. And I'm excited every time Bradley Dack gets near the ball. He's the difference we need at this level. He got some physical attention, but he seems to just get on with it and lets his goals do the talking.

But I felt bad for Bury, not simply that we beat them, but that the club is in such a mess. Managerless, bottom of the league and dumped out of the cup by non-league Woking, they are in a poor state. True, four teams have to be relegated and only three will judge the season a success if they go up, but they looked to be a hopeless cause on Saturday, another club made worse by Lee Clark.

Into this story I'd like to mention a remarkable book I read a couple of years ago called The Forgotten Fifteen. It's a reminder that every club has a history, a period that makes fans swell with pride, but that things never happen in isolation. Bury's "glory year" was 1984-85 when a squad of just 15 players won promotion from the fourth division. But it was also amidst the decay and violence of football's worst year.

The author is James Bentley, a Bury supporter of my acquaintance, and it's a real gem. It not only deals with the matches and the players, but the lead up to the 1984-85 season and Bury's history. It includes an eclectic collection of contributions, including a foreword from Alastair Campbell and I ought to point out that I have some quotes in the book initially recollecting the former manager Jim Iley. But my principal contribution is describing a riot when Blackpool fans smashed up the ground in March 1985, just a few days after the end of the Miner's Strike and later caused mayhem on the streets of Bury. It was a season that James rightly points out, football was truly on the brink, ending so tragically in Bradford, Birmingham and Heysel.

On Saturday, during the stop start match I drifted off and my thoughts turned to that day over 30 years ago. Gigg Lane's good features are still intact and the old stadium has retained its charm and setting. Back then, in 1985, there must have been several hundreds of people intent on mayhem being barely controlled by the police. On Saturday, it was quite laughable watching Greater Manchester Police manhandling kids for celebrating a goal and lining up as if to stop a riot as Bury's fans drifted off and the only intent of any Rovers fans getting on the pitch was to ruffle Bradley Dack's hair.

Football has changed, in so many ways for the better, but it's been a mixed blessing for clubs like Bury. It must be hard enough to survive in the shadow of Manchester United and Manchester City, then there's the insidious creep of the Checkatrade Trophy where the "big clubs" get to play their reserves. In a couple of years they'll have Gary Neville's Salford City challenging them for support and sponsorship in the local area.

I've been in touch with James since Saturday to remind him that however bad he thinks it feels for Bury, it could be worse. You could be a fan of Stockport County.