Golden Arrow, or golden funnel? and blocking on Twitter - my (polite) questions for Andrew Adonis


I asked Andrew Adonis two questions on Tuesday night. The first was about the progress of the Metro Mayors, of which he has been a staunch supporter. The second was the one that got a roar of laughter from the chair. Will you unblock me on Twitter? It's on the video (above) at about 55 minutes in.

His inaugural lecture was entitled 'Never forget - Rome fell, what London needs to do to remain the world's greatest city'. There's a link to the whole thing here if you don't want to watch the video. As it was curated and presented by Dr Jon Davis from the Strand Group at King's College London, my inspiration and muse as the nation's foremost academic entrepreneur, the lecture was lavish in scope and impressive in range, particularly about London's history and power. 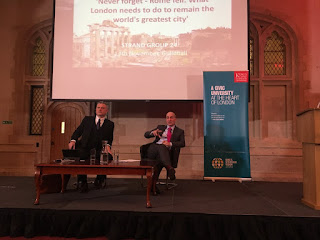 Here's a taster: "Consider for a moment what has made London so great. Political stability and military security unmatched by any nation in Europe – indeed the world – for 330 years since 1688. Huge and generally secure international trade also since the late 17th century, first by British naval dominance and the British empire, and more recently by the European Union and a benign international regime for trade. When the French captured Amsterdam in 1795, much of the city’s wealth fled across the Channel, as it did from Antwerp during the Napoleonic wars and from Paris itself and other cities of continental Europe during the wars and revolutions of the 19th and 20th centuries."

He built up to a vision for an ambitious infrastructure project - the Golden Arrow - connecting all points North to our nation's capital.


"I suggest turning the “golden triangle” of universities in London, Oxford and Cambridge into a “golden arrow” of urban innovation, which includes Liverpool, Manchester and Leeds as the “shaft” of an arrow uniting the North, Midlands and London. This is possible because of HS2, which will treble transport capacity while also cutting the journey time between these destinations to under an hour. This will boost economic activity and help fix the housing crisis by bringing more homes within easy distance of London."

It includes, by the way, the case for better east west connections, but the purpose is to grow London. And that's my problem. I've never quite bought the argument that HS2 is necessary to free up capacity on the present West Coast line. In 2013, my own reservations about it were that the link would become a talent funnel. It's arrival hastens the need to develop a thriving necessary Northern Powerhouse with a clear and distinct interlocking purpose. As I said back then: "The shorter journey time to London starts to shrink the reach of the talent pool. As Manchester and Leeds are two hours from the capital then it makes sense to have a physical presence in the North. Cutting journey times to an hour undermines the case for that. I think the flight of senior corporate finance professionals from Birmingham to London has been evidence of this."

No other country has all its core economic, political and cultural power so concentrated in one city. Developing alternative constellations that connect better with one another, and basing the case for doing so on a social benefit model is a pressing issue. It's refreshing that a discussion about London's future takes into account the North, and the Midlands, as he did so admirably, but my weakness, my most grievous fault, is to look at each problem through the other end of this telescope, from Manchester. I want a shift in this metropolitian London-centric thinking. Expecting it at a lecture about London was a stretch, I get that, but I'm not convinced that trickle down will work any more effectively when we've got a dirty great train line.

I have form for saying I like Andrew Adonis and very much enjoyed chairing an event with him, which I wrote about here. I thought he was treated appallingly by Ed Milliband, who gifted the Tories a 2-0 lead on the Northern Powerhouse, which then cost him the 2015 election. Adonis is a thinker, a strategist, someone for whom thinking big about knotty challenges is exciting.

But he's also been wrong. He was wrong to push so vigourously the case for no-power city Mayors in 2010, when the case for Metro Mayors needed to be made. He is also wrong-headed in his assault on the UK's university sector, which he presumably thinks he is saving from itself. No, our university should not revert to being a poly again. And I'd cordially invite him to Manchester to show him exactly why.

My second question is linked to that point. It was simply, humbly, kindly, that he unblock me on Twitter. It has been hard to disagree well in this febrile, nasty environment. And if I've been rude, then it is with regret and I apologise. But I believe we can engage, respectfully, as I hope this blog has demonstrated.
Posted by Marpleleaf at 9:30 am