The problem with the Conservative Party 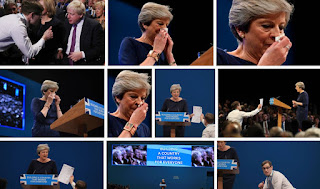 This could be a very long blog, such are the depths and the extent of the problems "in" the Conservative Party, but this series of remarks are intended primarily to address the problem "with" each party. That said, the evidence is plentiful. Given I've been up close and personal with six different ministers during their party conference in Manchester, the insights and observations just keep coming thick and fast. In some cases 'thick' being the operative word. I don't honestly believe that the Tories are evil, nor do I think they are the 'stupid' party, but their collective and individual ability to commit acts of great stupidity simply reinforce the view that they are (to quote one commentator this week) "malevolent privileged scumbags". It is the gift that keeps on giving to their political opponents.

The embodiment of all of this is Boris Johnson; too clever by half, boorish, bumbling and yet deeply loved by the activists. Sometimes his excesses can be tempered by the boring sensible technocrats in his own cabinet - likeable ministers like Greg Clark and Dominic Grieve - or even in his own family. Though his more clever younger brother Jo committed a gaffe about students having the choice to live frugally, which played directly into the narrative that they are detached from how most people live their lives.

At the start of the 2017 conference there appeared to be a deep desire for this gathering to reset their core values, to take their base philosophy apart and come up with a sensible vision of the future. In so doing it would discover the reasons why their support among every expanding demographic is declining, this, from CapX is good on that. Fair play then to Tim Montgomerie and his new venture UnHerd and this piece on ten things every Conservative should dwell on; respect to Roger Scruton for this radio piece on what conservatism is (they are for responsibility, liberals for freedom, socialists for equality); here is Ruth Davidson on reforming capitalism; and probably the second most interesting Tory politician around is George Freeman, who created the Big Ideas Festival which Jamie Barttlett does a decent job of dissecting here.

But none of that has been the story. None of that seems to have any cut through. The mess of Brexit, the weak divided government and an aimless Prime Minister was summed up in the omnishambles of her conference speech. The coughing, the stunt with the P45, the letters on the backdrop falling off, the coded body language of her cabinet members all rendered all of the above efforts utterly useless. Even her own laudable policies to tackle big systemic issues like housing, skills and energy prices will have fallen apart before I've hit 'Publish'.

But this is the biggest learning of the Tories, despite all of this, they're going to stick with Theresa May for a couple of years. They're going to torture this poor and unwell woman because they can, but also because they have no alternative yet. But they also have the time, they have the one thing the party exists for - to secure power and to never let it go.

The topline narrative is that the Tories are playing out a succession drama but as Matthew D'Ancona says they still need to confront that deeper and more profound existential question and develop a vision of the future that people can get: "That proposition needs to be explained in language that speaks to every home and those who long for their own home; to people who believe with every fibre in their being that they have no stake in the status quo, and that more Toryism means more poverty, more inequality, more misery."

The trouble is, this is the sort of thing that usually goes on inside an opposition party as they dust themselves down after a defeat. The immediate problem for the Tories is that they are in government and don't seem to have the foggiest as to what to do.

Next: the problem with a new centre party

Posted by Michael Taylor at 3:19 pm