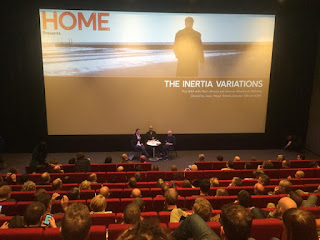 Sat in the audience at cinema 1 of Manchester's Home on Monday I pondered the thought that I knew next to nothing about one of the most interesting and compelling artists of my generation. I was absorbed by Matt Johnson's The The, especially the Infected album and particularly Heartland. It also gave me a devotion to music video that inspired me to launching a magazine that celebrated its craft. It made my mixing pop and politics list from 2014.

But even back then his interviews with the music press were sparse and his albums sporadic. Most other bands I liked, I knew loads about. But while there was an intensity to his music, there was a lot he was holding back.

I saw him once in a cafe in Shoreditch and someone in the office I was working in told a story about him owning a building around the corner and that he was making music for films. A true enigma. But one with a whole story of his own as to why these long periods of inertia set in.

It was a special event, a screening of the documentary about him, The Inertia Variations, directed by Johanna St Michaels, his ex-partner and mother to their son, Jack. It only worked, he explained, because of the intimacy they'd shared and nature of their relationship. The result is a personal and emotional film about Matt, but also about the creative process. It's an incredibly atmospheric piece of work, occasionally reflective and never sycophantic.

In the talk afterwards, chaired very well by Jason Wood, the head of film at Home, he spoke a great deal more about his work to try and stop the encroachment of east London by developers. On a new build site of an expanding city, we forget that much of what we enjoy that is new doesn't come at the expense of what went before. For now, at least.

Never a prolific performer, Matt has announced some live dates next year, including three in London, the No6 Festival in Portmerion and, he hinted, something in Manchester. Yes, please. Johnny Marr was in the audience and I didn't notice him shaking his head.

Anyway, there's an interview with him from Uncut, here, and a really good piece here from the ever excellent Northern Soul website.

Posted by Michael Taylor at 6:18 pm