Not fit to wear the shirt? 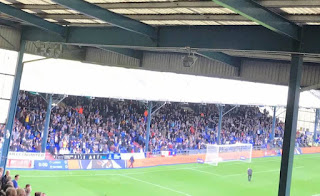 There’s a word that I’ve come up against in a child-rearing and mental health context recently that I haven’t quite been able to shake.

I could add the dictionary definition here for you, but here’s what I think it means. To react to something disappointing, some kind of setback, in a completely over-the-top and irrational way. To deduce from one event or situation that there is a catastrophe, a crisis, a disaster.

That’s what happened at Boundary Park, Oldham, yesterday. We lost 1-0. We deserved to lose. The performance was way below what Rovers fans have come to expect this season (more on that later). At the final whistle, fans near me were swearing, shouting, venting. The cry was ‘you’re not fit to wear the shirt’. During the game there were people around me shouting for multiple players to be subbed off, even when we only had one more change to make.

Rewind to last month’s trip to Shrewsbury. The team were undeservedly cheered off the pitch. Personally I thought that was a far worse performance than Oldham and we were very lucky to get a point. We didn’t deserve anything.

Would they have been lauded yesterday at Oldham if Elliot Bennett hadn’t missed an open goal? Or Peter Whittingham’s shot bounced under the crossbar and in and if somehow we managed to not fluff a goalmouth scramble? Probably. Sport is all about fine margins, but ultimately about scoring the goals, or winning the race, or building the points total.

I’ve got my own opinions about the players we’ve got, and I respect that my view is as subjective and potentially flawed as anyone else’s, but the following may put me at odds with the consensus:
The trouble is, we’re a third division team now. I thought the result yesterday was disappointing. The performance was inadequate. The reaction though was depressing. I’m up for this season and I’m prepared for more days like this. How much of this will be forgotten if we beat bottom of the table Plymouth on Tuesday? Will it be a return to form and a team of world beaters again? Time for us all to toughen up and stop catastrophising.

Posted by Michael Taylor at 8:42 pm

The fragility of some Rovers fans should be expected. I've seen Forest, Bolton, City (yes, that one), Leeds and others come down to the wastelands of the third tier. I've seen us beat them all, and I've watched supporters of each team respond in exactly the same way. "How dare this little Pennine club beat us! Do they not know our history?!" A few more results like this will separate those fans who understand the predicament Rovers are in and are up for the fight, and those that thought this was going to be a bit of a novelty season, with lots of quaint little grounds to visit and wins every week.

However, for me, your biggest problem is Mowbray. I'm unsure where his reputation as a strong, astute manager comes from. There's little to go off looking at his record. He should know how things work down in League 1. Spreading the ball to tippy-tap wingers on the hope they'll skin their man and get a great ball in doesn't work at this level. 9/10 there'll be a lump of a full back there, who cares not if the man ends up in the stand, so long as the ball does as well. I lost count of how many times Rovers fell foul of that.

Direct football is the what gets teams out of this division meaning the midfield is the key battle-ground. Partly because the Rovers team is a bit light-weight, but mainly because Mowbray didn't prioritise (or didn't seem to) this area of the park, we completely over-ran you. Jack Byrne probably won't have an easier game all season.

On Saturday's performance, Rovers won't be going up this season. And with Mowbray in charge, promotion looks unlikely for subsequent seasons as well.

Rovers are a League 1 team now. The key to getting back to the Championship is owning that, and playing the likes of Oldham at their own game.

Let's see if Mr Mowbray has learnt any lessons by February 10th...