Tear down this wall - a fresh start for Piccadilly Gardens 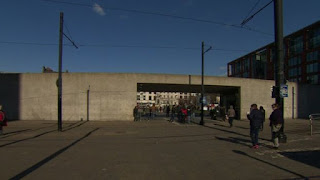 That's what President Ronald Reagan said in a speech in Berlin in 1987. Just over two years later, on this day in 1989, it indeed came down. It may seem strange to be quoting American presidents on the subject of walls today, but the issue has resonance.

The Berlin Wall was a symbol of division, but also of profound ugliness and a brutal crushing of the human spirit.

I would never go as far as to suggest that's what we have in Piccadilly Gardens in Manchester, but it was announced today that a new masterplan is to propose knocking down the curved concrete edifices between the gardens, bus interchange and the tram tracks. When it was designed it was probably one of those functional architectural plans that may have looked like a good idea on paper, but has become a symbol of something that doesn't work.

The coverage in the Manchester Evening News for their campaign to restore the Gardens to some kind of former glory has spoken of how the wall divided opinion in the city. True, there was Sir Richard Leese defending it and virtually everyone else railing against it. He was right on a couple of points though, the Gardens are a well-used public space and what went before seems to have been lost to the collective memory of the city, or at least a very rose-tinted idyllic view. The trouble is, the area has become a magnet for crime and feels very scruffy. A co-ordinated approach with the police, the city council and the landowner L&G is addressing this.

It now provides an opportunity to really debate the wider aesthetic of the city. To make it work better everywhere. I have a fear though, that without a completely different approach to beauty, safe spaces and gentler development then this will never work.

For the last three years the city centre has been a mess. The long term gain will be a better St Peter's Square and a Second City Crossing for Metrolink, but people have just got used to their comfort and appreciation of beauty being disregarded.

At the recent Design Manchester festival debate, the starting point was the ambition of a devolved city region administration that has a huge opportunity to re-imagine how the city looks and functions. People can be very grumpy about design and see it as a top level luxury, especially in age of austerity. I disagree. In The Times last week - Clare Foges drew attention to the planning system to be more thoughtful, subtle and appreciative of beauty.

I thought the debate was a missed opportunity for would-be Mayor Andy Burnham to make a far bolder and more imaginative claim for a new pitch for the aspiring city to properly embrace design and a better vision that respects everyone's right to live in a community surrounded by beauty. And for the avoidance of doubt, this applies as much to forgotten towns like Marple, or Bolton, or Middleton, as it does to the very centre of the conurbation, represented to millions as Piccadilly Gardens. There is a body of evidence, gathered here by Caroline Julian that bolsters this thought.

And at a functioning transport level, let's not forget the impact of the colour coded tube map in London and the impact of the orange overground lines to how these services were perceived, used and appreciated. Transport Minister John Hayes touches on this in a speech on the need to make new stations better designed and less ugly, but it goes beyond that.

I hope this is a beginning. An appreciation of city planning and how space should be shared and valued. But for now, tear down the wall.

PS - This, from Manchester Confidential, is very good.

Posted by Michael Taylor at 3:59 pm