So where are we going to build all the houses?


One of the most important debates we've ever had in Greater Manchester is about to get going. Where are we going to build all the new homes the city region needs to grow?

The newspaper coverage of a very thoughtful IPPR North report (of which I chaired the launch today) came down to the one issue guaranteed to get middle England foaming at the mouth - the Green Belt.

The Greater Manchester plan for this is now out for consultation on the ambitious plan to build 225,000 homes in the next 20 years, 20,000 of them in the Borough of Stockport. Only so much of this can be taken up with brownfield sites and creative high density building in district centres and around transport hubs. So this will mean Stockport giving up 10 per cent of its Green Belt to green light schemes in High Lane and Woodford for 4000 and 2400 units around the route of the new Airport relief road.

Already I've had leaflets from local politicians - well, our Conservative MP and his Councillors in Marple, asking us to "protect the Green Belt".  There was comment today from Trafford's leader that this intervention is most unwelcome and clearly disappointing to him. Political pressure on Labour council leaders in Bury and Stockport to resist the Green Belt erosion will also be immense. And so it should be, as it's actually an existential question for where we live. 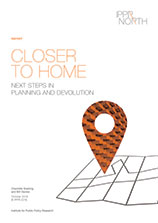 Taking it to a Greater Manchester level is a decent start. It recognises meaningful economic geographies and appreciates the flows of people to where they work, from where they might want to live. A Greater Manchester planning system can then take into account housebuilding around services and infrastructure and not the lag that responds to these when they reach breaking point and gridlock.

There is a desperate need for new houses to be built in this country. The price of land, the price of housing, is terrifying. There is a market failure that requires state intervention, a boosting of the institutional private rented sector and a role for the imaginative co-operation demonstrated by forward thinking and resourceful leaders in the social housing sector.

The demand for housing - fuelled by the fact we live longer, more people live alone and we absorb more immigrants to this country than we lose expats - has rendered the old planning system not fit for purpose. So many glitches in the system mitigate against a mature and sensible response, one that is long term and actually involves some actual, er, planning.