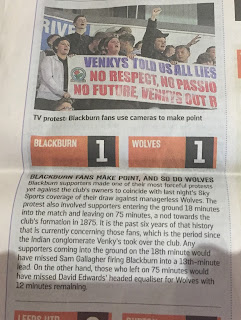 It saddened me yesterday that Rovers fans who quietly trooped out of the Riverside stand on 75 minutes were booed and jeered, just as my lad was when he took his seat at 5:48. It saddened me too that whistles were blown from the 18th minute to the 75th when the protesting fans entered the stadium.

The whole thing is a mess.

I packed a lot into the day to get to the match, including taking in the Northumbria University open day in Newcastle, taking three trains, dropping off one son in Marple and picking up another in order to drive the 80 miles round trip to see the Rovers play Wolves. We held our insolent and defiant Barmy Flag up towards the camera gantry before kick off and there were stickers distributed and displayed that summarised how I feel about the owners. But I chose not to join the 18:75 protest, but to support the team in the way I usually do for the full 90 minutes.

It saddens me every day that these owners remain in control of our football club. It cheers me that there are fans who care enough to want to do something about them (I just wish they could spell and use basic grammar). The coverage in the papers, on BBC Radio FiveLive and Sky, who screened the game live, focused on the protest. There can be no doubt now that we have an unhappy fanbase.

But while I won't attack or condemn those who protested in the way they considered best we can't return to this corrosive and divisive situation again.

I genuinely don't believe the protest affected the outcome of the game. So please don't play that card in the cause of attacking the protestors. But the next stance to highlight this just cause has to be targeted towards the ultimate goal - persuading the Rao family that they should enter talks to exit the business. I don't know how we do that, genuinely. But for those who do have an influence on what the next move is, could you please learn whatever lessons you can from last night and pledge to pursue a course of action that doesn't cause such division again.

The team is playing better than in the gutless and clueless performances at the start of the season. Whether there will be three worse teams in the division by the time we visit Brentford on the 7th day of May is debatable. What other clubs around us seem to have is a strategy to get out of this mess, the courage to change manager, the ability to invest in new players. We just have to hope loanees can stay around and that key players don't get injured. And we need all the support we can muster to get behind the team.
Posted by Michael Taylor at 7:08 pm