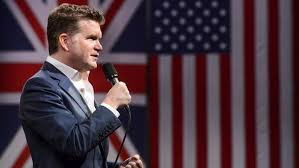 So, you're stuck at Chicago Airport in the snow. You're desperate to get to New York, but all the flights have been cancelled. If your ticket is with a mainstream airline the staff will be firm, polite, courteous and honest. They'll say, there simply aren't any flights, it's a real shame, we're really sorry and as soon as can we'll make it right.

A certain budget airline, on the other hand, has a different approach. Their staff would hold up a bit of paper and say, 'look, they've cancelled all the flights, but we're going to get you home'.

The first airline is Jeb Bush and Hilary Clinton (and arguably the Remain campaign). The second is what Donald Trump and Bernie Sanders (and Vote Leave) have done. Basically, they've placed themselves outside of the problems in front of the electorate, but said they'll sort it. 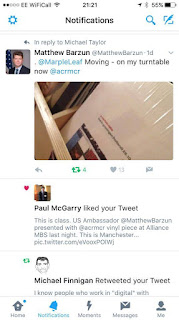 That was a taste of the colour, verve and wisdom of the US Ambassador Matthew Barzun on Wednesday night at Alliance Manchester Business School. He was everything you'd expect a speaker at a Vital Topics lecture to be - provocative, original and compelling. In fact I can only think of one that has left me disappointed and that was Lord Digby Jones. I like the stridently and brazen intellectual aspiration. I love the unspoken verbal jousting between the guests asking questions (me included). But most all I just love that understanding that there are forces in the world that are seeking to make things better, fairer, flatter and more interesting. It reaffirms the view that progress doesn't aways - rarely ever - comes from government, but from the slightly haphazard way in which business implements good ideas born in universities. Sure you need good governments to convene, direct and bring order, but none of his will stop because we've got a buffoon as Foreign Secretary and there's going to be an even bigger one in the White House.

Barzun drew some great discussion points on networked businesses and hierarchies. Reminding us that the forces at work need not always be the ones of regression.

These are dark times indeed. Sometimes it really does feel as if the lights are going out everywhere, but sometimes you just need reminding that we will overcome. And it feels better that there still are people prepared to take ownership of the challenges. Because eventually the madness will end. Things can be made better and I fondly hope that we'll be hearing more from a laid back and funny business guy who tweeted us back the next day to say how moved he was to be gifted with a vinyl copy of A Certain Ratio live in Groningen, which includes an epic long version of the demanding Winter Hill. Like all good climbs, like even the most difficult journeys, it will be worth it.

Posted by Michael Taylor at 9:28 pm