The power of an idea - creativity, common good, Cottonopolis and the joy of good mates 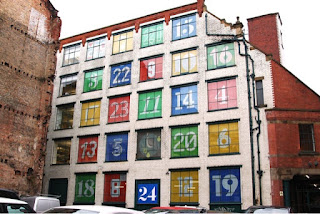 There is something quite special about an idea that inspires and sparks the public's imagination.

We've had passers-by stop in the street and point up at our office this week. We've had TV crews reading the news as a backdrop and we've had tourists make a trip to come and look at the action. No, this isn't a shameful protest of intimidation against an MP, but a wonderful and uplifting visual campaign to commission original artwork and to raise money and awareness for the incredible work of the Wood Street Mission, a local charity helping poor and vulnerable people.

24 Lever Street in Manchester's Northern Quarter has been transformed into a massive Advent calendar, showcasing the creativity of the agency True North and hopefully brightening up what has been a scruffy corner of town. If you'd like to buy one, follow the whole campaign on the 24 Days of Lever Street website.

I ran a conference this week in Liverpool for the Institute of Chartered Accountants England and Wales (ICAEW), an organisation always looking to explore, push and challenge the future. Despite every prejudice you have ever had about the profession, trust is such a solid foundation from which to build.

The keynote (and standout) speech of the day was from Mike Emmerich, who I'd invited to come and share his story about Manchester's journey to devolution and to weigh up the reality of the Northern Powerhouse from his new berth as the founder of Metro Dynamics.

Having been at the centre of Manchester's recent triumphs and as architect of the devolution agreements and other economic development projects, like the renaissance of textiles in Greater Manchester, Mike is very much of the view that you have to create and drive ideas to make the future work. We are, in short, in control of more of our destiny than we sometimes dare to admit.

Mike's plea was for businesses in the North to "own the challenge" that the Northern Powerhouse presents. I still hark back to George Osborne's original speech at the Museum of Science and Industry where the three most important words were "You Tell Us."

By way of an example Mike evoked the Manchester textiles project he kicked off in his previous job at New Economy Manchester, which has now resulted in matched investment, a fund to back textiles innovation and the return of cotton spinning to a mill in Dukinfield.

So I want to end this week's blog by paying tribute to two of my best pals, Mike Emmerich and Martin Carr, the principal at True North, the agency driving the Advent campaign. Not only do the pair of them regularly amuse me in ways that only good mates can, but they have also been there for me to advise, support and challenge in ways only good friends can.

Between us we started DISCUSS, a debating forum where the best ideas can be explored, probed and challenged. We honour Manchester's spirit of innovation, but also the quirks of creativity, the pursuit of the common good and the combination of all of the above that make this city such a special place.
Posted by Michael Taylor at 7:36 am