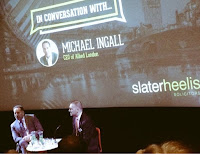 Some things get said so often they become accepted wisdom without a passing thought. Take the idea that an ever changing Manchester needs to stay "edgy".

I disagree with that, but first some context.

I did one of my "In Conversation" events for law firm Slater Heelis yesterday. It's a simple format, I interview on stage a senior Manchester person, there's no agreed script, I'm not hostile, but I'm not supine either. The idea is to present the audience with new and fresh insights. So far we've done regen lead Eddie Smith, Sir Howard Bernstein and the interim Mayor Tony Lloyd.

On a dark Thursday morning, that was wetter than an otter's pocket, I sat down at the front of Cinema Two in Home, Manchester's newest cultural asset, with Michael Ingall from property developer Allied London. I don't know him well, but I've always been impressed by his willingness to admit he doesn't know an answer, or has previously been wrong. You can do that when you take enormous calculated risks that prove you are usually right. This, lest we forget, is the man who has delivered Spinningfields as the established new Central Business quarter.

Three years ago at the MIPIM property conference he conceded that he doesn't know who will occupy the commercial buildings his business are constructing now. We have run out of large firms of accountants, large banks and firms of lawyers seem to be shrinking. That means reduced demand for large floor plates within glass boxes. Seeing that and still believing fervently that work will continue to be done in shared spaces but in very different forms takes some forethought and sets a tough test for your team.

Since then, within Spinningfields, he's had to admit - as he did in our conversation - that high end retail hasn't worked. Armani and Flannels have done OK, but the Avenue will become a home for the quirkier end of the well planned, well branded dining market - Fazenda, Comptoir Libanais and the Oast House, probably the unlikeliest success story of Manchester food and drink recently.

He also wants to transform the old Granada site into a place to live - really live, not piles of investment apartments - and to sit alongside the Factory, a World Class arts installation. I asked him about culture - especially as we were at HOME and although I don't recall his exact words I'll use mine instead. HOME is alright. It's badly needed, it's an improvement on the Cornerhouse, but in Paris they've got 50 of them and in Budapest about a dozen.

So a frighteningly intelligent bloke who has been humble, bold, wrong and entirely correct also challenged the notion that Manchester needs to be edgy. I agree with him.

Being edgy is too often used an excuse for things that are a bit rubbish. Hulme in the 80s was "edgy". I remember a student inviting us to a party that would be full of "Hulme people". She didn't mean brewery workers or the unemployed and certainly not the criminal gangs. I'm sure a lot of good music and art got created there, but it was uninhabitable. I don't look around at people sleeping in doorways in the city centre and think that's "edgy". I think it's bloody awful that anyone should have a life reduced to that. I hate seeing it because it offends my sense of humanity.

I don't walk through Piccadilly Gardens and think "this is good". To celebrate it as "edgy" as I'm sure no-one really does, is a cop out. It's scruffy, a magnet for criminality and it's ugly. I didn't even get round to asking Michael Ingall about it, it's not his immediate problem, but I wish it was someone's.

I'm willing to test this theory to destruction over the next week or so and invite you to do so as well. It's one of those things you start to see everywhere once you start to think about it more. Is it edgy, or actually just a by-word for a bit rubbish.

It brings to mind that Pulp song about the Common People, where the art school ponce is slumming because she thinks that poor is cool.

He also spoke fairly bluntly about the acquisition of the London Road Fire Station, opposite Piccadilly station and a gorgeous but derelict husk. The Friends of the building have done a remarkable job of keeping up the pressure on the owners, Britannia Hotels, who have rather let it rot. Now that Michael's Allied London own it, hopes will be high. But he will not be preserving it as a museum piece. It will be a significant statement of the city's willingness to be a grown up world class city. It will impress. It could include a boutique hotel, a high end gallery, somewhere that impresses big hitters when they get off the train from London. It will without question be better. But it won't be edgy.
Posted by Michael Taylor at 9:12 am