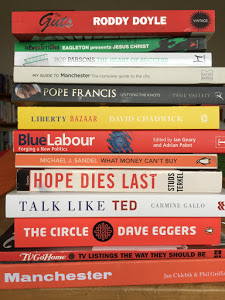 I've always had a pile of books I've hoped to get through. It's rare that I've ever finished every one, but here's the pile from the second half of 2015.

I absolutely loved all three novels on the list which I read on holiday in Croatia back in August. My mate Dave Chadwick's historical novel Liberty Bazaar was my favourite of a strong three and the full review from August is here.

Dave Eggers' The Circle is a terrifying dystopian journey into the cult like world of Silicon Valley. Every time I've shared a moment on Facebook or Twitter, or even this blog about what books I've read I've thought about the twisted purpose behind the "free" Internet model we've all signed up for.

Anyone familiar with Roddy Doyle's writing will be both amused and moved by The Guts, a sometimes tragic return to the lives of the characters in his earlier masterpiece The Commitments. Cancer, post-crash Dublin, family strain. But still very funny.

The Blue Labour collection was published before the disastrous General Election and where ideas of community and Labour's traditions were trashed by a collective unwillingness to face up to the challenge of a Summer of hard truths. Same goes for Hope Dies Last, an inspiring collection of stories of community organising recommended by John McTernan. The Talk Like TED collection was good too, but I've only dipped in and out, to be honest.

The two books on Manchester are both by writers I know well - Phil Griffin and Jonathan Schofield. They present the city I love through very different lenses and with a different intended outcome. Nevertheless they both really capture the quirks and optimism really well.

I enjoyed Paul Vallely's biography of Pope Francis and something I kept returning to as the Holy Father continued his transformative mission throughout the Church. It was a good accompaniment to Terry Eagleton's superb revisiting of the Gospels and the view of Christ the radical.

There were loads that made it on after the photo was taken, including at least three Jack Reacher books by the prolific Lee Child, these are properly addictive. I didn't get round to to Rob Parsons Heart of Success or Michael Sandel's What Money Can't Buy. I honestly wasn't in the right place or frame of mind for either. I think I am now, so I'll give both another go when I get stuck into the new job.

Posted by Michael Taylor at 8:45 pm