A bad result in a bad place. MK Dons away. 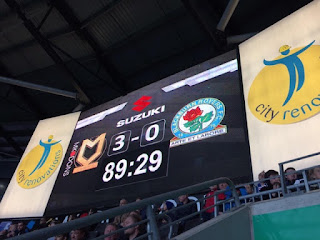 I only came to Stadium MK because it was a new ground and so it had all the ingredients for a dismal afternoon, tucked away at the top deck in a flat pack stadium (next to IKEA) against the wierd soulless shapeless thing that is MK Dons.
I said when I bought the tickets that it felt a bit like I'm crossing a picket line at Parkside colliery circa 1985 while eating a Cape orange.

If the experience wasn't weird enough in this futuristic new town with its roundabouts, boulevards and no visible centre, the game was one to forget. Getting Henley sent off after ten minutes and going one down from the penalty that followed made it hard enough, but apart from a couple of brief spells that came to nothing it just wasn't our day.

A brief word on Rovers fans. Spotted at least three sets of grown men squaring up to each other as frustration took hold. Not big or clever. Is this normal on an away trip?

Bring on Derby, get over this quickly.

As a ground, it's alright as far as the sight lines and seating comfort goes, but it was half empty and devoid of atmosphere. Still, number 80 chalked off in my punk 92 and 68 in the total 92 and ground number 141. Happily, I need never to come here again.
Posted by Michael Taylor at 5:10 pm