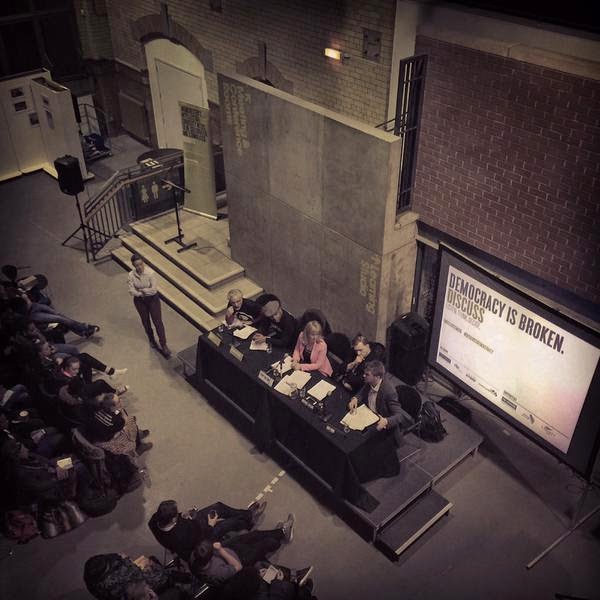 I spoke at the Discuss debate on Democracy on March the 11th. I was speaking AGAINST the motion that Democracy is Broken. Here's my case. I was more than ably supported by Dr. Rob Ford, author of Revolt on the Right and an academic at the University of Manchester and up against activists Kwame Ibegbuna and Loz Kaye.

Good evening. I intend to prove to you tonight that Democracy isn’t broken.

It is, to quote Winston Churchill, the worst form of government invented…

Except for all the others.

I wanted to set this out to start with by using the example of two cows.

PURE DEMOCRACY:
You have two cows. Your neighbours decide who gets the milk.

REPRESENTATIVE DEMOCRACY:
You have two cows. Your neighbours pick someone to tell you who gets the milk.

FASCISM:
You have two cows. The government takes them and sells you the milk.

ANARCHY:
You have two cows. Either you sell the milk at a fair price or your neighbors try to kill you and take the cows.

That’s the Walking Dead theory of politics. Maybe some of you think that’s better.

Maybe the very fact we can reduce our democracy to such absurdities is a sign of a rumbling, grumbling discontent with it.

I’ve always been fascinated by our politics.

By the theatre of public life – how we attempt to reconcile issues of how we distribute resources by a system of popular validation. 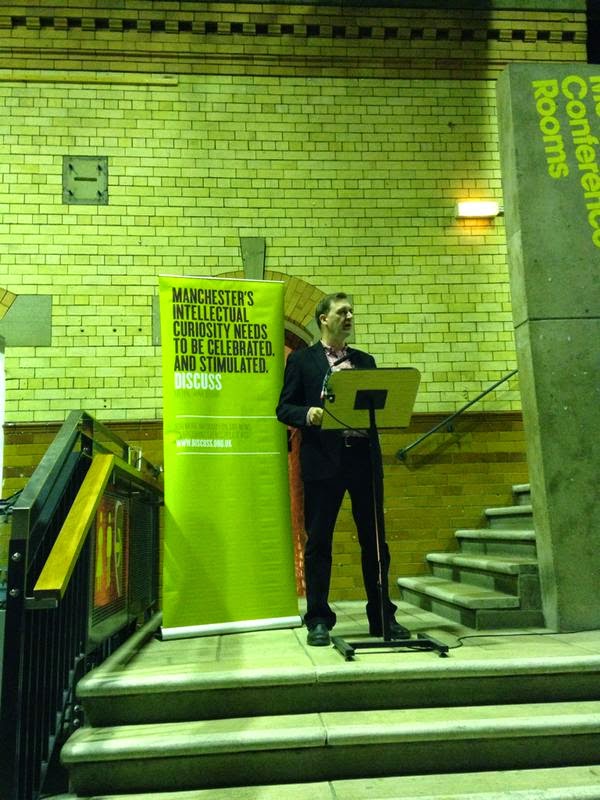 From 2000 to 2012 I worked as editor of a high profile business magazine. I retained my fascination in politics, but put my participation on hold.

In that time as a journalist I would always put my readers and my own publication over any party political loyalty.

But as my time doing that ended in the spring of 2012 something happened.

I live in a small town called Marple. It sometimes gets generously referred to as “leafy Cheshire” but in reality it’s a mixed community in Stockport of working families and retired people, a mix of private and social housing.

Lots of self employed people. And yes, with white vans and occasional England flags. And I’m cool with that, by the way.

Our local sixth form college was in a financial black hole and opted to sell one of its sites to a supermarket chain.

As news dripped out, people got busy.

Small teams divided up tasks to separate rumour from fact.

They scrutinised minutes of meetings, they put in Freedom of Information requests.

On one balmy evening 500 people turned up at the Local Area Committee meeting where usually the councillors go through the motions to an audience you could count on one hand.

They said TRUST US.

A group was born.

Privately the Councillors appealed to us to “tone it down”.

We didn’t. We turned it up.

We gathered signatures on a mass petition.

There was a march through the centre of Marple.

We lobbied the leader of the council. He backed us and developed a spoiler scheme in the centre to spike Asda’s guns.

IT WAS EXCITING. IT WAS OUR VERY OWN MARPLE SPRING.

People started talking about what kind of place we wanted to live in.

We considered standing candidates in the local elections, but as all the parties knew where public opinion stood, there would have been nothing to gain for this single issue campaign.

In turn Asda tuned on the charm. Their consultants from Deloitte held a consultation.

They made promises on how engaged they’d be in helping the community and complementing local businesses.

It took a while, but eventually, 18 months later, Asda gave up.

The College did the sensible thing and sold the site to a housebuilder. Much better.

This my friends was Democracy at work, the will of the people.

When it matters. When decisions are made that affect people’s lives and when they feel they can change, it is to the tools of democracy that we turn to.

I was inspired by this community action.

I was reminded of the words of Tony Benn.

You see there are two flames burning in the human heart all the time. The flame of anger against injustice, and the flame of hope you can build a better world.

I thought long and hard about how to play this out.

At the same time I’ve worked hard to develop this brand – DISCUSS – because I’m passionate about debate and ideas.

I rejoined the Labour Party.

When I was younger and angrier I did so because I hated the Tories.

Through my activism in our church I have learnt more about the rich traditions of Catholic Social Teaching and the pursuit of a COMMON GOOD.

As Cardinal Vincent Nichols said in a letter this week  - “WE HAVE A RESPONSIBILITY TO BE INVOLVED IN THE DEMOCRATIC PROCESS. IT IS A DUTY WHICH SPRINGS FROM THE PRIVILEGE OF LIVING IN A DEMOCRATIC SOCIETY.”

We live in fascinating times and face an opportunity to reforge our democracy.

No-one has yet come up with a better structure for change and social action than a political party.

What I found wasn’t that surprising.

Hollowed out political parties with historically low levels of engagement and membership. 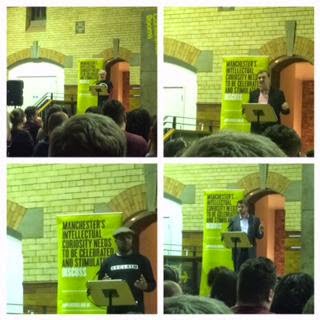 More votes cast for the X Factor, Strictly or Big Brother than in council elections and even general elections.

In fact, Loz has already told you all of this. And I imagine Kwame will layer it on even more with examples at a local level.

It is hard and thankless.

People telling you they don’t vote, because “they don’t believe in it”.

What do they believe in?

But politicians are waking up to this.

Parties know that we have to engage differently. That’s what democracy forces us to do.

It offers us the challenge to do things differently.

But for all of the disillusionment in the political process I still believed it offers us the potential to change lives, and to ENJOY the active endorsement of voters.

Democracy places a powerful burden on the elected to hold the powerful to scrutiny and to exercise power with care.

It is taken for granted, but for the most part, it can work.

Or the prevalence of the shallow narcissism of Russell Brand.

In the current parliament we have seen a return to scrutiny in the powerful committees.

We have seen more rebellions against a party line by free thinking Members of Parliament who feel the breath of accountability from their electors and visibility like never before.

How politics is done is changing as a result of this.

By a quirk of fate and a twist of circumstance I found myself selected as Labour’s candidate in the upcoming General Election.

I’m keeping up fast, but I don’t have the party baggage of other candidates. It’s not my career ambition, but I do feel a calling.

And the very way we are doing politics appeals to me too.

In this general election my party is having to rely on smaller donations and wider participation. Teams of activists making local contacts.

Ed Miliband has set us the target of having 4 million conversations this campaign. Direct contact. Personal contact.

This isn’t happening by accident. It is a drive for more democracy.

Obviously I hope it is successful. But even within our flawed democratic system it offers us hope for the future.

Back to our two cows.

You have two cows, the government in London want to decide who gets the milk. You organize a campaign to keep it local. You stand on a milk crate in a public campaign and persuade the people that’s a fairer and more sensible distribution of resources.

That’s what I’ll be doing.

I say please continue to support the fine traditions of democracy and reject the motion.