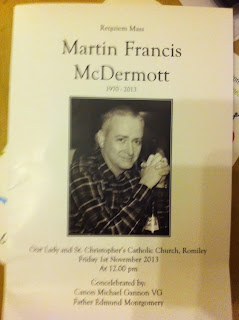 Driving around two Sundays ago, my favourite radio programme played New Order's signature tune Ceremony. My thoughts immediately turned to Martin McDermott who was, as we feared, just hours away from leaving us forever after a long illness.

The next time I heard that song was today at the Crem as Martin's body was laid to rest. His music always meant a lot to him and it was a frequent pleasure to share mutual thoughts and nostalgic stories.

As a Dad you do the dutiful thing and take your kids to all kinds of parties over the years. Often the other parents on duty are the Mums. But I'll be honest and say I always particularly smiled if Martin was there at the side of a swimming baths or at a grotty play pen. It meant we could natter about New Order, the Ritz on a Monday, a bit of Man United, Michael Gove, Brian Cox, renewable energy and the things our kids say. It was always an enlightened pleasure. His mates and family told another level of story today. Their deep loss of a friend, a father, a husband, a brother, a son. It was also heartbreaking to hear of his suffering and pain, which many of them saw in such raw form as his cancer spread. But the Martin they knew also shone a light in their lives.

Today has also been a big day for our boys who are close friends with two daughters and a son who have just lost their Dad. Friendship, comfort and kindness are what is needed now. But it's hard, really hard. We just don't know how lucky we are.
Posted by Michael Taylor at 3:25 pm