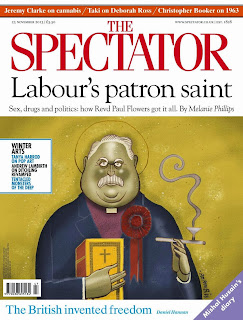 The next election campaign is going to be a horrible, uncivilised and dirty battle. If any further evidence is needed then the choice of cover for the latest Spectator gives you a glimpse. For me, the choice of the phrase 'patron saint' is dreadful.

It's actually fair enough for Melanie Philips to argue, as you'd expect, that he's an icon of our times, that he was hiding in plain sight and was utterly out of his depth as chairman of the Co-operative Bank. I don't dispute her right to make that argument and as usual she gets carried away. But she doesn't actually use the phrase patron saint. She suggests that he instead ticked all the right boxes and got away with it. She makes dubious use of the flimsy rumour that someone made a casual joke about Paul Flowers having a "Colombian cold" but that's it.

I also can't find the cover on the website. Just the piece which is here.

The choice of cover is down to the editor, Fraser Nelson. I don't believe it's a wise one and I'm pretty sure now that it's one they have regretted.
Posted by Michael Taylor at 5:51 pm