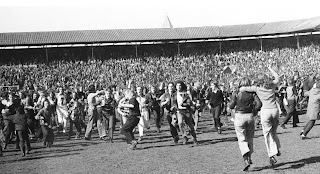 That was the scene, top pic, that I witnessed at my first ever football league match 40 years ago today. They are Burnley fans celebrating promotion to division one on the pitch at Deepdale in 1973. The 1-1 draw ensured that North End stayed up as well. Although I'm a grumpy old man who rails against so much of what modern football represents, it has given me friendships, experiences, highs and lows and many, many memories.

But any memory of a football match is never just about who scored, what the game was like or what the score was. It's also so much about the sense of occasion and the day out. Here are my twenty best memories from the last 40 years in date order.

Preston North End v Burnley at Deepdale - my first match, with my Dad. There were pitch invasions, celebrations and a stand off at the end as the teams played out a 1-1 draw. I had a bobble hat knicked. Football wise I remember that Burnley team well, Alan Stevenson and Peter Noble and his combover. This was one of many trips to Deepdale, but I never took to supporting North End. However, something stirred in my soul, as I've now published a book by one of PNE's best known fans and I've married a Claret!

Blackpool v Sunderland - 1975 - the day Mickey Walsh scored a wonder goal for Blackpool. My Dad was a milkman and worked Saturdays, so it was rare for him to get a free day in time to get us to a match, but he went to extraordinary efforts to get to games. As he was from Wrexham, but had lived all over Lancashire as a lad, he wasn't a loyal fan of any team he just wanted to go to games. This was a cracker, I remember the Sunderland fans in their thousands, swaying and singing. The Mickey Walsh goal, which you can see on YouTube here, was a belter.

Liverpool v Trabzonspur - 1976 - This was when Liverpool dominated English football, and were about to embark on a conquest of Europe too. The team was brilliant by any standards, Keegan and David Johnson, Ray Clemence in goal, solid in defence. And we sat in the main stand close to 500 noisy Turks.

Blackburn Rovers v Orient - September 1977 - I was friends with an older lad called Kevin Bradley who was originally from Darwen. He took me on the train to Blackburn to this match, though I had been to Ewood before for a schoolboy international and with my Dad. Some other hard lads from Lancaster were Rovers fans as well - Baz Dootson (who I still see), Mark Currie and this nutter from Scorton called Bill Binks. When you're 11, these things matter. But I loved football and desperately wanted to belong. I liked Ewood Park, the walk from Mill Hill, the smell of pies, the accents, the way Rovers played. I have always loved an attacking full back and we had two this season - Hird and Bailey.

Wales v Scotland - 1977 - Anfield - Joe Jordan secured a passage to Argentina with a little help from the hand of whatever twisted God he serves, which earned the visitors a penalty. Except they weren't really the visitors at all. Apart from my Dad I didn't see a Wales fan all night. The Tartan army roared Scotland on. See it on YouTube here.

Wales v Spain - Wrexham - 1984 - that Mark Hughes scissor kick. We were there. Me and my Dad finally got that night at Anfield out of our system.

Swindon v Blackburn Rovers - 1983 - I missed some of the big, big occasions of the Rovers promotion back to the second division, but saw the majority of matches through the Bobby Saxton years. Some fun memories of London trips with the Accy branch, Simon Garner hat tricks, some giant killings, being scared witless at Wolves, getting battered at Newcastle, but this was great. Rovers rarely took big followings and it was often a bit tasty back then. But for Swindon in the Cup we had what can only be described as a 'mob of lads' out for this, which was rare. It certainly was an oddity to be part of the gang the police were tracking and who were dishing out the random acts of bullying that constitutes a hooligan day out. Me and my mates went in a transit van. Rovers won 2-1. 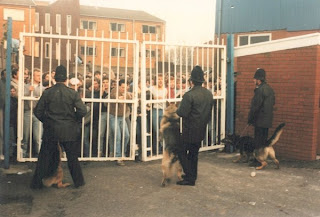 Bury v Blackpool - 1984 - I've never been involved in a riot before, but this was like something out of the wild west. Some good pals of mine are Blackpool fans - one is now married to my sister - and this excursion was one of a number of crazy days out with them in Blackpool's third and fourth division days. I took a reel of photos that day too which are now on the Lancashire Lads website and included in Peter Walsh's book Hooligans.

Millwall v Rovers - 1991 - two reasons. Minor reason, we won. Main reason, I was writing as a stringer on Rovers for the Lancashire Evening Post and met Jack Walker after the match. He gave me a quote, so we had a bit of a scoop on Kenny Dalglish joining the week after. It was great fun in the press box, but my heart was on the terraces.

Barcelona v Sampdoria - Wembley - 1992 European Cup Final - incredible. Me and John Dixon were in the Samdoria end. Epic, that Barca team with Koeman, Stoikov, Laudrup and that Sampa team with Vialli and Mancini. Not the only European final I've been to, but the most memorable. Can still picture that Koeman goal now.

Blackburn Rovers v Derby County - 1992 - play off semi final. Two nil down, won 4-2. Speedie. Scotty Sellars, Mike Newell's amazing curling shot. Just brilliant. The second leg at the Baseball ground was great too, the play off final at Wembley v Leicester was so tense I felt sick. But this game was just incredible for drama, noise and intensity. Drove Pat Whittle's BMW up from London

Blackburn Rovers v Arsenal - 1992 - first home game in the top flight in little old Ewood for me and I was there. Shearer scored. Enjoyed sending a fax from my Mum's office to Arsenal supporting workmate Nick Masters the next day. Technologically driven football banter ain't what it used to be.

Blackburn Rovers v Queen's Park Rangers - 1994 - on the way to the Premier League title Rovers took QPR apart 4-0. Shearer was on fire. This used to happen all the time, it was what we expected every week and I have to pinch myself that it actually happened at all. This one stands out as it is the only game my Mum has ever been to.

Arsenal v Blackburn Rovers - Highbury 1997 - with Roy Hodgson as manager we beat Arsenal 3-1. It was brilliant. I don't think Arsenal lost another game that season. It was a defining moment in football as Arsene Wenger turned it round. I remember Peter White telling me in Terry Neill's pub the night before that he thought Hodgson was up his own arse and that the players didn't like him. I used to love away matches in London when I lived there. The London branch was a lively scene at the time and I made lifelong friends.

Preston North End v Blackburn Rovers - 2000 - secured promotion. See those Burnley fans dancing on that pitch (above), that was me that night, jogging on to the pitch to celebrate with David Dunn, Matt Jansen and Garry Flitcroft. I went corporate with Alec Craig, Ian Currie, Kenni James and Roland Horridge who I have got to know much better since. A top top night. Dropped my phone on the pitch when I ran on. When I eventually retrieved it I had a text from my sister - "who's the hoolie in the suit?"

Tottenham Hotspur v Blackburn Rovers - Cardiff - 2002 - Winning any cup is just brilliant, this one was a truly epic victory of endeavour over arrogance. Still laugh about it now when ever I see my good friend Steven Lindsay. Oh such a perfect day, so glad I spent it with you.

After qualifying for Europe we experienced an away trip to a bleak European concrete hell hole. But that was Celtic, first we had a trip to Bulgaria to enjoy.

CSKA Sofia v Blackburn Rovers - 2002 - Although Rovers won the tie, it was only on away goals. A great trip with the lads. I can genuinely recall hardly anything about the game at all as we had been on it all day. Tour rules apply. Still laugh thinking about it now.

Manchester United v Porto - 2004 - United went out. Porto had Benni McCarthy playing for them and their manager was Jose Mourinho. I remember going corporate with my good pal Neil Tague and enjoying a good snigger at this behind our hands. And we both thought that the bloke in the Matalan coat seems to be quite a character. 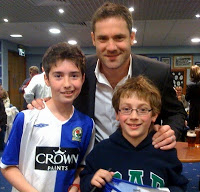 Blackburn Rovers v Arsenal - 2010 - I've really enjoyed taking the kids to Rovers, until recently. We had season tickets in the Riverside, then the Family Stand, but this match in 2010 is the pinnacle of those days. It was Joe's 11th birthday and we went back to the player's lounge after the game for a drink with David Dunn, who was man of the match in a 2-1 win. Happy days.

Posted by Michael Taylor at 8:30 pm

You forgot Grimsby away - the return of Chris Price (scored) and selling all those 'Many Miles From Home' fanzines and an away win (3-0, or 3-1)?

Bluemonday69.
Brilliant. Makes you realise footballs loosing its soul.
-Last orders in the Jubilee, shout out for the last seat on the coach for away game. Waking up in Bournemouth next morning in turn ups and tie and going swimming baths for a shower. Brilliant day had, result irrelevant, love of Rovers everything.

Excellent! Was at several of those. One with you! I, as a Scot appreciated Anfield. Was behind the goal with my brother! A

I reckon we were at two of those together - promotion party at Preston and Sofia away! Great days.