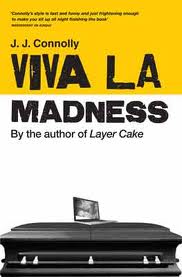 This book is absolutely bonkers. While the title of Connolly's debt novel Layer Cake took some explaining, right up until the main character's final denouement, this name is clear from the outset. The story is set in summer 2001 and takes up the tale of two of the main men from Layer Cake, the anonymous narrator and Morty, his link to the criminal underworld. They inhabit a world of drug dealing and crime, but this is also mixed up with international high finance, computer hackery and even the military industrial complex. Illiterate but street smart villains plotting up with duplicitious toffs. It gets stranger and stranger, which is good. The plot twists are good, and the portrayals of the lengths crims will go to are staggering.

He's also very good on dialogue - can you believe the words being said? Well, given that we'd seen Daniel Craig in Girl With The Dragon Tattoo recently, and that he played the same character in the prequel to this tale, you can't fail if you place his dry delivery and brooding insolence as you go, indeed, he is so clearly at the forefront of Connolly's mind again too. There are other unstated reasons why all the ugly gangsters dislike him - he's a stunner, right? There's lots of detail about London's layers, from Mayfair to East Acton, but on the whole it's just a mental story. Highly recommended.
Posted by Michael Taylor at 9:07 pm