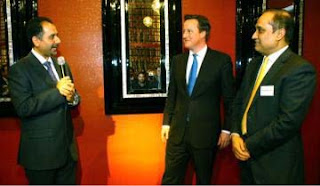 David Cameron was in Manchester last week. I met him at the Vermilion restaurant at a reception organised by Iqbal Ahmed, successful businessman, the restaurant owner and a Conservative Party supporter. I was invited as a chum of Iqbal and his friend Sajjad Karim one of the Conservative MEPs for the North West, and not in any kind of press capacity. For that reason I'm not supposed to mention the event, or even to quote the PM.

What I will say though is that Cameron was very impressive. I always think he is at his best when he freestyles and speaks from the heart. As he's proved this week with his challenge to the SNP over the Union, he knows which battles to fight and the ground on which to fight them. He spoke for ten minutes without notes, something I don't see him doing enough.

There were only about 50 of us at the reception and I was in the racial minority of white people present. The PM spoke to those there with a real sense of Conservative history and tradition and as a real One Nation Conservative. The values he stands up for are, he says, enterprise, family values, country. Not surprisingly it struck a real chord.
Posted by Michael Taylor at 10:56 pm

Oh dear!
Mick, you've changed. Have you cancelled your subscription to Socialist Worker?
Go and listen to 'Burning Sky' by the Jam from the Setting Sons LP then respond to me if you feel able.
Whatever next, a pro-Kean campaign?

"And the values that we had once upon a time seem stupid now that the rent must be paid."

What are those ideals? really? And what's the difference between an ideal and a value?

What have been the big things we've marched for and ranted about in the past? Poll tax - repealed, good. Nuclear disarmament, did history prove that wrong? I don't know. Anti-aparthied - we won. Good. Arthur Scargill and Derek Hatton? I shudder to think about what would have happened to the Labour Party if they'd won. They would have shrunk to an unelectable rump that couldn't have delivered the achievements of 1997 to 2006 of a minumum wage, the primacy of the NHS, the rebuilding of northern cities, free museums, immeasurably better education. Who would dare, even in an age of austerity, unpick any of that?

And they are now the universal values of a democracy.

But the biggest victory for our values, the greatest victory of all has been to make Britain a less racist country than it was when we were kids in Lancashire. I felt really proud being with all those Asian business people last week, including someone as brave as Sayeeda Warsi who has become an articulate centrist politician having batted off racists in her own party as well as the BNP and people in her own community who call her a coconut.

The courage of a guy like Sajjad Karim, who has to count Griffin as a "fellow NW MEP", who stands up to protests outside his home, is astounding. And he will lead the fight against the BNP at the next election.

That's just about the practical application of politics though.

"Ideals are fine when you are young." I think ideals are even more important. It's the left who seem trapped by dogma and unable to comprehend popular social movements that the idealists of Egypt, Tunisia and Libya rebelled for. The knee jerk anti-Americanism that inspires one stance follows a logic that ends with George Galloway saluting the courage and indefatigability of Saddam.

As for reckless capitalism, who's been banging on about that this week? Oh!

As for a pro=Steve Kean campaign. No chance.

Liberty, if it means anything, is the right to tell people what they don't want to hear.