Truce at Rovers - to no avail 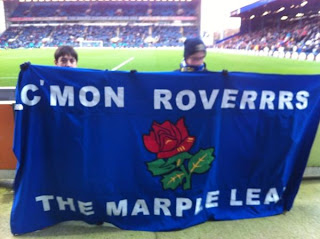 The kids persuaded me to take them to see the all conquering Rovers today. And for our return to Ewood, we were at least relieved that the win at Old Trafford seemed to have taken the sting out of the fans protests against manager Steve Kean and the owners Venky's. So the fans weren't the reason Rovers lost.

The performance never lacked effort, but it always seems the way against Stoke. They attack everything, they pressure the physical threat - meaning, they fouled Samba at every set piece. But that wasn't the reason Rovers lost either.

For me, it came down to the service to the strikers - Yakubu looked a handful and it speaks volumes that Huth wellied it whenever Yak came close to him. But he didn't get any kind of service from a very functional and frustrated midfield. Wheras Stoke had the threat of Etherington, our flat midfield 5 just passed it to each other and back again. Pedersen wasted his throws and his corners, and a late free kick, but got the biggest cheer of the day for a slide tackle on Steve Kean. I wasn't impressed with Petrovic at all and Formica was ineffective.

Would it made much of a difference if someone had played off the Yak from the start? Who can tell? But it's this defeat, like the losses to West Brom and Bolton that will count for a whole lot more in May than a shock win at Old Trafford.

We took the flag, it was examined at the gate, and was allowed in as the words aren't offensive to the manager or the owners. I am genuinely thinking of getting the top line changed - any suggestions gratefully received.
Posted by Michael Taylor at 11:10 pm