My mates #16 - Ian and Andrea Wolfendale 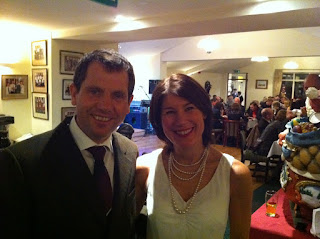 I've long maintained that the secret of happiness is spending time with the people you love. Well, this week has been a pretty bloody brilliant week because I've just been bowled over by the love of good friends at every turn.

I'll come on to all of that over the next few weeks and months, but today I wanted to pay tribute to two of my dearest friends Ian Wolfendale and Andrea Jenkins, who have just got married. This is a series where I randomly select someone I know and do a quick blog about how I know them, how we met and what I like about them. It's difficult to know where to start with these two.

Wolfie and Andrea and I work together. Andrea is in Insider's events team and Wolfie works in business development. They both have a calm, measured and patient manner about them. They are both very good with people and really excellent at seeing things from everyone else's perspective.

All over the country I meet people in banks, law firms and corporate finance companies who deal with Wolfie. I have to say I've never seen a client base with such respect and affection for someone who seeks to take money from them. But Wolfie listens and understands what they need. We have been to Belfast together a few times this year and you see the efforts there of a man who has introduced people to each other which could quite literally transform lives.

Similarly, I rarely see event organisers get thanked from the stage. I'm as guilty of taking them for granted as anyone, but Andrea has achieved that many times when she's worked in partnerships with people who can be difficult to please.

They also live locally - Mellor - and we get the train together sometimes, sharing our gripes about the shoddy service from Northern Rail / Northern Fail. We have also all been involved in the Marple Food Festival's Samuel Oldknow Pie Competition where Andrea gets to take notes while me and Ian eat pies. Bliss.

On a personal level, I will never forget how Wolfie was there for me when I was at my lowest ever ebb. It seems an age away now, but he took me in, put his arm around me and in his no nonsense way just helped me focus and get on with my life. In particular, he made me dispense with self pity and sentiment.

They got married in New York, but had the reception in New Mills. I can think of no better metaphor for the pair of them than that. The party was brilliant - a delightful and eclectic gathering of interesting and kind people - a fact that makes me think of no better tribute to them both. There were lovely speeches from best man Howard Thorp and from the father of the bride, Russ Jenkins. But the star for me was Wolfie when he announced they were very like Charles and Diana. Oh yes. There are three people in their marriage, he announced. And then revealed that ever present presence in their life - the entertainment: Elvis! Out popped the King himself! Rock and Roll.

To Andrea and Ian - may your love always be tender.

Posted by Michael Taylor at 8:01 pm