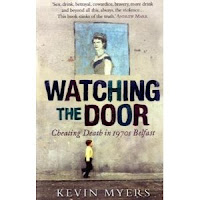 Given I've been over to Belfast so much this year, I've taken a keener interest than average in the history and heritage of this unique city.

Last night I finally finished Kevin Myers' mesmerising account of his decade there in the 1970s. It is a horrific and, at times, unsettling tale. He doesn't hold much back from outing his own personal demons and weaknesses, which rather separates it from a straightforward historical account. That is hard work on the reader at first, but once you accept him, it makes for an honest and heartfelt recording of a city gripped by a particularly savage collective madness.

What I've experienced has been all of the good stuff about Belfast - the eager and rather emboldened sense that this place will succeed against all the odds. I look around at people I meet with a real feeling of awe. There is a real appetite for normality and a better life - I mean, there is everywhere, but in Belfast it is particularly acute. You can feel it this week as they have embraced the arrival of the MTV Awards.

Coincidentally, this morning, with much of this on my mind, I read Jay Rayner's review of Made in Belfast, a restaurant I've been to and enjoyed. There's nothing factually wrong with the piece by a writer I'm proud to call my favourite food critic in the British press; he wasn't patronising or snooty about the food, nor was he mean about the city in the way some critics love to be. Jay is also upholstered like a proper restaurant critic, which made this place just right for him. But I was disappointed with his review because I very much enjoyed the food in Made in Belfast and was happy with the choices I made when I went with a large party. In fact, we all were. That's the luck of the draw on these occasions. I also enjoyed the ambience and informality of the place, as Jay Rayner did. It's just that he wasn't too taken with the menu and the rather forensic account of each dish - or the need to list the produce. I think that's forgivable, especially as the character of the place is rather given away in the name. I do however bow to his far better knowledge of food and think it's such a shame his Tandoori wings weren't crispy and that the food was "relentless".

But, here's the thing. It's Jay Rayner's first review in Belfast, I hope it won't be his last. But there's a real passage for any city towards acceptance and normality - and one of those albeit very minor staging posts on that long road is a rotten review of one of a city's restaurants by a disgruntled critic from a national newspaper and, as importantly, the debate about its merits that follows.
Posted by Michael Taylor at 10:17 am