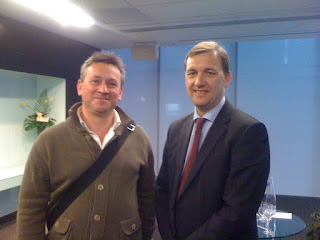 I hosted a fascinating event last week. Absolutely fascinating. Basically, I sat on a comfy chair with this really interesting bloke, watched a bit of telly and asked him some questions about his life.

I was interviewing Tony Wood, the creative director of Lime Pictures, the Liverpool-based production company responsible for making TV shows for young people. Their roster includes Hollyoaks and the highest rated kids' drama on US TV, which is a show shot in Liverpool called House of Anubis. He is also the creator of The Only Way is Essex, the reality-drama which has created such a stir in tellyland.

You can describe The Only Way is Essex as many things, but you have to agree it was a risky proposition. Filming a group of real youngsters in their natural habitats in Essex bars and salons, but creating such drama, such characters that the concept has dominated the bottom shelf magazines and the tabloids. These events, which link with social media - by providing the root of a conversation on Twitter and Facebook - become valuable properties.

But these ideas aren't handed down by broadcasters to be made in production factories, they are created by brilliant minds who understand the sweet spots of popular culture, honed while making Coronation Street and Footballer's Wives and learning from the experiences on a TV spin off of Lock, Stock and Two Smoking Barrels and filming Families, an "Australian soap", in Manchester.

All told it was a fascinating and some of the acting, direction and set building was incredible. In fact, it was reem.
Posted by Michael Taylor at 10:33 am