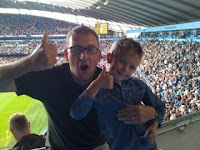 Me and the youngest lad went to Man City v Rovers today. We were with a few other media people as guests of City's corporate hospitality team. We had to sit on our hands when Niko Kalinic took the lead for Rovers in the first half. We also had to be restrained at the final whistle when we celebrated a point won.

Sometimes there is joy to be had from a decent defensive performance, especially after two defenders go off injured. But some solid goalkeeping and, at times, some heroics and hardy jostling in the midfield from Phil Jones and MGP saw us through.

I still think City can win the title, but they will need to be more ruthless and direct. I thought Adam Johnson was going to rip us apart, but he didn't, thankfully. SWP was clueless. But who knows who they'll buy, or who the best eleven is. What I do sense is they missed a Bellamy today. And Roque Santa Cruz must be very out of favour if Jo keeps him out of a game. He was rubbish.

But there's only one story for Match of the Day tonight: Dirty negative Rovers thwart luckless City. Don't believe a word of it.
Posted by Michael Taylor at 6:01 pm

Robinson showed why he should have been taken to South Africa today. Samba was also immense today for us. His block on the line was brilliant towards the end of the game, as well as Givet's block from Tevez seconds before.

I was pleased with a point away at City but I was also left wondering whether we could have exploited Manchester City at times today if we had someone with a bit more creativity in the centre of the park.

Thanks for your comments about my work in midfield today :-)