We've got our Rovers back 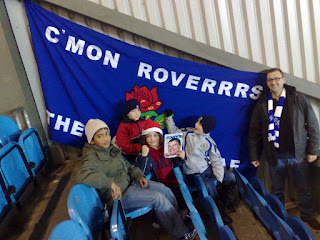 Smiling at the Rovers again. All that optimism was well founded as we won 3-0 against Stoke City. The players seemed to play with a lot of belief and were much better organised. Those smug sofa dwellers at Match of the Day even acknowledged a positive contribution from Eamon Andrews. I thought David Dunn was quality yesterday, a vice-skipper's performance. Still unsure about Robinson. He's a decent shot stopper, but is hopeless at judging crosses. Another bright spot was Benni McCarthy - I think he's an exciting and gifted player. He can score some awesome goals, and is capable of creating something out of nothing. Allardyce seems to have staked our future on him getting back to his best.

It was interesting listening to Dunny on Radio Rovers after the match. His apology to Sam Allardyce two years ago, when he snubbed him at Bolton to come to Rovers again, was probably the smartest phone call he ever made.

Before the game I popped the Marple Leaf flag over the front of the upper tier for all of two minutes before the chief steward came towards us following orders to prevent any obscuring of the full stop of Walker Steel. I spotted him before he spotted me and then confused him by removing it completely. I'd love it if we had a spot to but banners and flags, like the Europeans and Man Yoo seem to accomodate.

Also, the badge seller outside was moved on by Ken Beamish. I always wondered what his job was at Rovers. Now we know.

Pictured are Anil, Sean, Joe, Big Sam, Louis and me. All smiles, all happy. We've got our Rovers back.

Posted by Michael Taylor at 3:37 pm