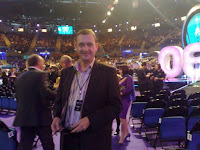 Had a great night last night at the BBC Sports Personality of the Year Awards at the Echo Arena. I went as a corporate guest and managed to avoid speaking to John Prescott who was also in our party.

You've seen the awards on TV so you don't need me to run through all of that. It also really worked as a live spectacle for the 9000 punters. What was so impressive was the detail. Every seat was filled even if the ticket holder - named - didn't show, as was the case with Garry Cook, the chairman of Man City. I was sat just behind Prescott and Brave Kirsty Howard, and across from Brian Barwick of the FA and Andy Murray's mother. The Man United 1968 team were just to my right.

That moment when Jack Charlton came out was priceless. The ovation from the audience for Sir Bobby was lovely. And it was nice he thanked Liverpool. A class act.

I thought my pass might get me into some aftershow party for fellow corporate liggers, but was happy to find we were mingling with all kinds of sports stars I was far too shy to go up and speak to.

I've since thought of a ten questions I could have asked if I'd been the kind of nerdy pest that most other corporate liggers were turning into by the time I left at 10.30pm.

Ian Rush: Are you going to get as pissed as you did at the North West Football Awards?

Brian Kidd: You must be pleased Paul Ince is now going to replace you as the worst manager in Rovers' history?

Mike Newell: How come you got to sit next to Paula Radcliffe, in front of Lewis Hamilton and behind the director general of the BBC? Did Alan Shearer get you a ticket?

Lewis Hamilton: Do you realise you might have won if you paid your UK tax?

All the cyclists: Do you realise you've saved cycling from the clutches of the druggies?

Martin Bayfield: My mate John Fowler got mistaken for you once, by Ryan Giggs and his mates, how does that make you feel?

Ricky Hatton: Do you want a lift home?

Chris Eubank's kids: Why don't you dress smartly, like your Dad? On second thoughts, don't answer that.

Denise Lewis: Do you remember we met at a drinks party at my pal Ross Biddescombe's flat
about 10 years ago?
Posted by Michael Taylor at 9:38 pm