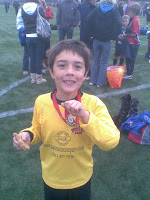 Watching the kids at the weekend is a much more satisfying football experience in so many ways. For a start, the kids haven't had their heads turned by WAGs, but are eagerly cheered on by a very loyal army of PAGs (Parents and Grandparents).

We go to support our own offspring, but encourage the others. We don't swear, curse or become that other blight on junior football - PAPs (Pushy Aggressive Parents).

Max has now got man of the match two weeks running for his goalkeeping heroics for the Under 7s. Joe got man of the match two weeks ago and was made skipper for the Under 9s at Whaley Bridge where they won 1-0. They've been named team of the week on the Marple Athletic blog, which by a remarkable coincidence is run by me. The proper Marple Athletic site should be ready soon, where we'll be much fairer with such features.
Posted by Michael Taylor at 10:25 am