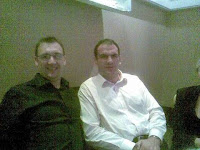 To the Midland Hotel, Manchester for a top night out with my pal Pat Loftus and some of his team at Deloitte. The occasion was Austin Healey's benefit dinner. Star attractions were Martin Johnson, Sir Steve Redgrave, Dean Richards and Jason Leonard. Martin came over to our table for a chat, which basically involved him telling us what he thought was going wrong with the England rugby team since he retired after leading the World Cup team 4 years ago. He said he's not been offered any jobs at all - not Leicester, England, anything. So I said I could arrange for an interview at Marple Rugby Club if he fancied it. He said he'd think about it. He even signed a pre-contract on my place setting. I know people at Marple RUFC pop into this blog from time to time. If you need me to do any more to sort this out, you know where I am. Always happy to help.

Anyway, top bloke. I liked the fact he spat out the name "Francis Baron" with barely concealed disgust. I've never liked the chief executive of the RFU, he's a pompous twit who has landed on his feet. He used to run a dreadful satellite TV company WH Smith Television, which then did Screensport and some other dire channels. I recall him being thanked at a Rugby dinner for the 1991 World Cup as Francis Bacon. His face was a picture.

Interesting perspective on New Zealand from Martin. The fear of failure could well paralyse the team, he thinks.

Here's a dreadful photo of us taken by Damian Sanders on my mobile phone camera.
Posted by Michael Taylor at 8:29 pm

Labels: Days out, here's me with..., Namedropping, Sport

Whilst I can see that your tongue is embedded firmly in your cheek, there might be a bit of mileage for the junior squad here! Drop me a line at howard.roberts@gmail.com