Thick as thieves us, we'll stick together for all time 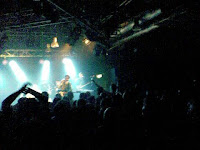 We went to see From The Jam last night in Preston and it was a superb experience. I initially thought it was going to be awful, as I said here, but was persuaded to give it a go.
The first obvious point to make is that the lead singer was Russell Hastings and not Paul Weller. I tell you what, he definitely knows his Jam tracks. I've never been one for these tribute bands, but this was a proper blasting out of all the old favourites.
The passion of the crowd - of which I was probably in the younger half - brought back so many happy adolescent memories. I was looking around for old faces from concerts I went to across the North of England, but we all look fatter and balder, though I'm sure I'd recognise Lancaster's very own David Watts - Gary "Swaz" Swarbrick.
The Jam were an unbelievable phenomena that appealed to young men like no other band has in my lifetime. Oasis came close. They also bridged a number of youth cults - like punk, mod and the early casuals. The sentiment in raw, knowing tunes like When You're Young and Town Called Malice really cut it with what it was like growing up in a very uncertain world, but without the ready made rebellion of hippy dom or overtly left wing political protest. Thick as Thieves - an album track from Setting Sons really got me thinking about the power of nostalgia for our generation and the awesome treasure chest of memories we have and the solid bond that our gang had from the love of this amazing band that touched our lives.
So, although Weller wasn't there, the whole night was worth it for the smile on Bruce Foxton's face. His bassline makes Eton Rifles, one of the best songs on the night. They even played my personal Jam favourite - To Be Someone Must Be a Wonderful Thing. It really must have been.
Posted by Michael Taylor at 3:56 pm