Book review in a lift - Opus Dei by John Allen 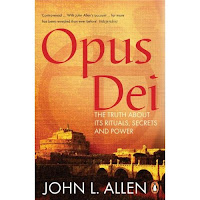 As a recently confirmed Catholic I wanted to have a delve into this most controversial part of the Church. As a well respected journalist covering Vatican matters John Allen's book is a well written account. It scotches a number of myths and confirms a few truths. Is the Da Vinci Code (which I haven't read) correct? No, it's wrong. Do they wear a cilice? Yes. Do they whip? Yes. Until they bleed? No. Is Opus Dei a sinister and powerful force? No. In Britain? Ruth Kelly is one of 500 members of a heavily indebted organisation, out of 5 million Catholics in the UK. Did Josemaria Escriva, the father of the Work, support Franco? Well, yes, but so did the Catholic Church, they were scared of communism. It's a fair and balanced account that ultimately paints a far less exciting picture of Opus Dei than the conspiracy theories about them. As a result the book tails off a bit.
Overall: 7/10.
Posted by Michael Taylor at 9:22 am