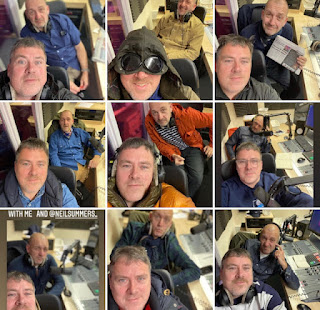 Since me and Neil started doing Music Therapy back in 2020, just as we thought we were emerging out of lockdown, we’ve really discovered a lot about ourselves, but also about our listeners.

Confession time, we only managed to record one show from the studio before another lockdown sent us all home again. For an absolute age we were recording from home. Blissfully, thanks to the ingenuity of the station controller Andy Hoyle and the wonders of modern technology, by some minor miracle, we managed to get a show out every week.

Honestly though, since we returned to the studio, it’s been a proper gamechanger. We get to twiddle nobs a bit more (fnarr, fnarr) get a few tips from Alex Cann, the most prolific man in commercial radio, and take over curated pictures of ourselves wearing a variety of much admired jackets.

One of Neil’s oldest mates said to him that he’d heard the show and that we sound like actual real radio DJs now. I think he meant it as a compliment, we’re certainly taking it as one.

You can’t beat being in the same space and having the right technology. The sound is crisper, we’re not likely to get bounced out by a dodgy WIFI connection, but it’s given us time to think and appreciate the music we play on the show.

We’re both hustling freelancers, looking for new opportunities, more often than not working from home, so the chance to do what human beings should be doing is an important part of our weekly structure. Although we haven’t been headhunted by BBC 6 Music (yet) every person I’ve done work for has found it fascinating that I do this. Neil has made films about the music and fashion scenes in Manchester and Sheffield for the fashion brand Pretty Green, which have been informed by having a focus on music.

But the main delight has been our interactions with you, the listeners. We have no idea on the numbers of people, but through social media we get lots of love and comments. We don’t do requests, but we do take suggestions from people who get the show and what we’re about.

Some of our listeners aren’t even in Tameside and the High Peak. They use modern technology such as Tune In and Radio Player, or the station’s superb app, to listen to the show from anywhere in the world, at a time of their choosing.

One of those conversations sparked an idea to do a slot called Original Spin. We pick a song that you will be familiar with, but probably didn’t realise was a cover version. A few times these have been Prince songs, I Feel For You, covered by Chaka Khan, and Nothing Compares 2 U which Sinead O’Connor rescued from being an unperformed album track.

It takes us on a journey into different styles, plays to our ethos of there being no such thing as a guilty pleasure and hopefully opens up music that will be new to people.

I also don’t think I’ve been as switched on to new music as I am now. So thanks for the opportunity and keep on listening. Drop us a message if you fancy a chat about what you’d like us to do next.