Another disappointing day at Ewood as play off hopes drift away 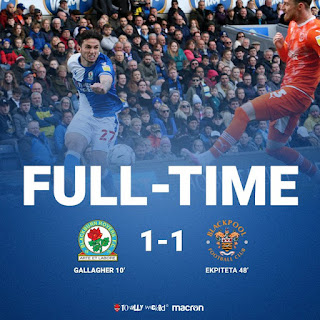 It was one of those days where the weather couldn’t make it’s mind up, but neither was it clear which Blackburn Rovers would turn up.

The first half version from Coventry, or the battling second half edition, or the ultimate bottlers.

As it happened it was the frustrating, nervy, disjointed, diving Rovers. Picking up stupid bookings, over hitting passes, getting in the way, losing shape and failing to hit cow’s arses with banjos, rarely troubling the Blackpool keeper.

For fans of most teams who fancy an end of season flourish, it’s the hope that kills you. I think today that’s gone. I write this before even looking at the other results, but this just doesn’t look like a side with enough belief to secure a top-six finish let alone step up to the occasion of the playoffs.

The team has missed the enterprise and guile of John Buckley in that in-between slot, not least when John Buckley himself has fallen so short of those giddy heights his performances offered. The same too could be said of thrusting Joe Rothwell and busy Lewis Travis. Instead, Rothwell looked disconnected and indifferent today while Travis just seemed to get in the way.

On the positives, it was good to be reminded how good it feels to have Dack on the pitch. He got the ball in the net but the pass from Lenihan bobbled and slowed on its way which may have bought the advancing defenders a split second worth of reprieve. He offers something exciting, and he should play from the start.

Another gripe while I’m in a low mood; I want the scoreboard to tell me how long there is to go, not that we’re playing Stoke City on Easter Monday. Or that we’re HOME and playing BLA. These are basic little things, but then so is passing to your own side. And as we know, getting those basics right are the foundations of all good things.

It’s not over, there are 15 points still to play for. I want to believe, I truly do, and there are better teams than Blackpool in the way, but on a bad show like that my main worry is there aren’t many capable of being as limp and listless as we saw today.

Posted by Marpleleaf at 7:15 pm