The meaning of football 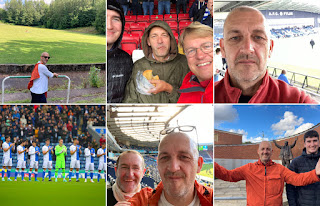 It was always going to be an emotional return to Blackburn Rovers. For me, it’s been gradual. A long in the planning trip to Euro 2020 that took me and my friend, Steven, to his home city of Glasgow for Ukraine v Sweden; a pre-season friendly at one of the English non-league’s new challenger clubs, AFC Fylde, and another warm-up at home to Leeds.

For different reasons, they all had something special about them that rather brilliantly lined up the main event of yesterday.

It’s been an awfully long time away. It would have been very easy to give up all of what I’m about to say. The first home league game at Ewood Park felt remarkably like the last one some 500 sleeps ago. That it was also against sneaky Swansea and with a weak referee was but a coincidence, but that the full quota of regulars sat around our berth on row 11 of the Riverside was a moment of affirmation of a sense of belonging. The players led the 10,000 crowd in applause pre-match for all those we’ve lost in this dreadful pandemic. I daren’t look, or speculate, at the empty seats behind us, that these prime spots aren’t once again populated by familiar faces and, though nameless, characters with who we have formed a bond. And it was delightful to take our friend Ian Herbert as our guest, one of those many people who we have got to know through football and who is always great to be around.

It was also about the rituals. One of which is held in my hand, in the shape of a Clayton Park Potato and Meat Pie. On another occasion, we’ll pop into Leavers Bakery on Bolton Road for a fix of the very best pre-match pie in all of football.

But there’s been a heck of a lot to dislike about football lately. The greed, the scramble to appeal to the vanity of an oligarch to bail out every club in the great unseemly gamble to not fall victim to ‘beware of what you wish for’. The Euros represented the best and worst of football, even for this Anglo-Welshman. A blend of hope, pride, and shame.

As for our team, despite the optimism of Rod Liddle in the Sunday Times who seems to think the ever-improving Blackburn Rovers will finish in the top six, without acknowledging that we’re about to see our best player leave through the same exit door as ten other former first-team regulars, the mood amongst the fans is gloomy. Tony Mowbray seems to have lost what mojo he ever had and is at least honest enough to admit the financial situation is grim. Though we were good for the win yesterday there are still too many players out of position (Rothwell, Gallagher, Dolan and Diaz, notably), the late substitutions disrupt any capacity to control a game fully, and there’s an unhealthy obsession with giving valuable Championship playing time to squad members of the Under 23s, of Everton, Manchester City and Liverpool, rather than those of Blackburn Rovers. That said, the stand-out player for me yesterday was homegrown John Buckley, who at times looked Tugay-esque.

I could have said all of that from the comfort of my sofa. That I didn’t is a tribute to the powerful draw of football, its culture, its rituals and our friends. Between those two Rovers matches have been three new grounds ticked off the list - FC United (159), Hampden Park (160) and AFC Fylde (161). I have a few in my sights this season, but probably will only barely stay in the 80s in my quest to ‘do the 92’.

Steven, with whom I've shared so many great memories, also helped us make a new one as he took me to Cathkin Park in Glasgow to visit the eerie remains of the home of Third Lanark, once a real force in Scottish football. The three sides of a bowl of terraces remain, as are the crush barriers, the pitchside wall, and if I’m being spiritual, a presence of what went before. It’s a tale of corruption and sectarianism I’m keen to discover more about. It’s proof that it’s more than just an old building, but a relic of our true human experience. So yes, forgive the obsession, but I’m oddly fascinated by stadia, where they are and where they were. I still have a frisson of excitement and anticipation in Manchester’s Moss Side on the approaches to the old Maine Road. I always look up from the train as it arrives at Bolton and eye-up the site of the old Burnden Park. But this was something else entirely.

We’re going to make more memories this season. Mostly in the company of Blackburn Rovers, but also Lancaster City, Matt Jansen’s Stockport Town and maybe a few other random days out too. Hopefully, the Rovers ones will be surprisingly happy ones, but to be really honest, whatever happens on the pitch, they are going to be far better being there than not. Ask the ghosts of Third Lanark.

Posted by Marpleleaf at 1:32 pm