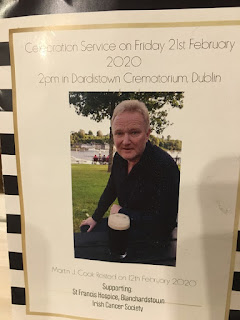 We said goodbye to Martin Cook this week, one of the nicest guys I have ever known. It was an absolute choker, to be honest. More so for how sudden it seemed, because although I knew he'd been poorly, I assumed he was over the worst and on the mend.

There have been two dates marked on the calendar that won't have been met over the course of the last year. His wedding to Bev last July in Dublin which we didn't get to, and a night out in Blackburn with Trevor, Tony, Robin, and Cookie, next Saturday, after the Swansea game. The importance of both of those dates to him is now so cruelly apparent.

At the funeral in Dublin yesterday it was, as all of these occasions attempt to be, a celebration of a life as much as the mourning of a loss. But I still can't feel much to celebrate today. I spent the day with Trevor Curson, someone I met at the same time as Cookie, and with whom we have shared so much, and that is a real blessing. It rammed home to me the real aching need to connect and make sure these friendships get the love and attention they deserve.

I first met Cookie in 1989 when as a fellow professional Northerner in London I started turning out for the Blackburn Rovers London supporters team on Sundays at Wormwood Scrubs. Cookie was a great manager, bringing a bit of humour and effort to the job. He was the epitome of a team player, going in goal if necessary, making the tough decisions about who played where and who was a sub (me, usually). But a team formed of such a mixed bag of people inevitably you found your own. On our end of season tours to Devon and Sussex we'd properly bond, me Trevor and Cookie in particular eventually forming the editorial team on the Blackburn Rovers London fanzine Many Miles From Home (Best Boy, Key Grip and Dubbin Mixer).

I did a blog a few years ago about 20 amazing football memories - which was way too limiting. Cookie featured in a few but he pulled me up on missing out Grimsby away 1991, where we sold hundreds of fanzines, had an astonishingly good fish and chips and saw a terrific 3-2 win. It was also about the journeys, the mix tapes we'd make to play in the car, or the crack we'd have on the train. I have probably never laughed as much in my life as I did on the way back from Sheffield Wednesday in 1992 when we composed a ludicrously childish and self deprecating "what type of Rovers fan are you?" quiz for our fanzine. Nor will I forget kipping on his hotel floor pre-Cardiff in 2002 (18 years ago, almost to the day) and spending the match day together getting soaked, before heading into the stadium for an epic day.

We went out for dinner together in Dublin a few years ago and he brought some Irish Rovers t-shirts for the kids, which was such a great example of his generosity. I managed to squeeze into one last weekend for the trip to Charlton, where we seemed to bump into people all day all saying the same thing - "how sad about Cookie". Charlton, like most London grounds, was somewhere we went together loads of times over the years, one extending into a great East End night out with his mate Tom McCourt, a lovely bloke with a massive hinterland of stories from musical history.

Listening to the wonderful eulogies in Dublin yesterday you get to hear perspectives from people he worked with, his family from Blackburn, the friends he's made in Dublin since he moved there. Although they were a view of him I didn't have, they were all consistent in the themes of generosity, warmth, friendship, loyalty, doing things properly, but also with a real intelligence. He'd write incredibly well put together Christmas cards, and they were not only funny, but precise. It was apparent when we did the fanzine together that his standards and attention to language was very high. So it was no surprise that he eventually turned his back on local government and civil engineering and retrained as a broadcast journalist. Along with Facebook, that's given us a slice of Cookie in our lives; his recorded voice on the Dublin Inquirer podcasts and on Dublin City FM; all marked out with his humour, his commitment, and his absolutely tip top music choices, which he also must have chosen for his service  - The Clash foremost amongst them, a bit of Morrissey, but the observational melancholy of The Jam's That's Entertainment.

All I can say tonight is give your mates a ring. Invest in those friendships that truly mean something. I've always said the key to happiness is spending time with the people who you love and I loved Cookie, I'm really going to miss him. But not only are there all the times we didn't have more recently, but all the times we did. Go easy, step lightly, stay free.

Posted by Michael Taylor at 6:03 pm

Mick,
Those are truly lovely words. None of us can believe this has happened. Cant get my head round that'll never experience a bit of banter over a few pints.
Stuart (b in law)

I met Martin (who was introduced to me as Dad) at Luton, but it was while living in London that our paths crossed the most.
Brilliant sessions in numerous pubs with great people and Martin was always so enthusiastic and funny, always coming out with amazing stories and funny facts.
Also spent a great weekend in Dublin being shown around great pubs by Martin. Always great fun and great to be with.
Was privileged to see him and his lovely wife Bev last August in Rush. He was in some pain at the time, but was still full of life and funny stories and it was such a pleasure to see him. He always brought so much laughter to where ever he was. Will be missed by many.

Thanks for sharing your memories Charlie. He was one of a kind, truly. RIP