The Missing Crypto Queen - the story of the year 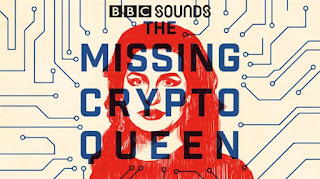 My favourite podcast of the year has been a real roller coaster of a story, the gripping tale of Ruja Ignatova, the so-called Crypto Queen of the so-called crypto currency One Coin, who seemingly vanished in 2017. I tried to book Jamie Bartlett to come back and speak in Manchester last year but he said he was involved in something which would blow my mind, and recommended his mate Carl Miller instead. He wasn't wrong (and Carl was great, as I said at the time).

More than just a radio documentary, Jamie has managed to create a compelling platform of information and an active network around the story. Jamie's narration, the use of music, the trust of experts, the whole feel of the production crafted by producer Georgia Catt. Jamie has written a really useful long read, here, which provides background, captures everything, but shouldn't stop you from delving in and listening to the series if you haven't already.

In the days when I used to write about conmen and scams I came across several individual acts of callous nastiness, all helped along by added helpings of delusion and greed. This has all those hallmarks on a massive industrial scale, but also with the added dimension of One Coin being almost cult-like, exploiting some of the poorest people in the world. It brings in global money laundering, tax havens and the dark web. In short it's a belting true crime tale for these dark times.

I can't believe it's not been a bigger story, and I'm now avidly following the trial in New York of some of the players in this unfolding drama. You can follow that here on a fabulous site called Inner City Press, which is all over the detail.

It feels like a real frontier moment, not just for crypto currencies, but also for the methods the BBC have deployed to get the story out.  Highly recommended.