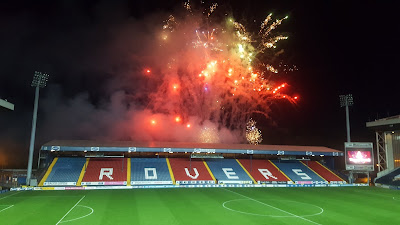 We have rules and habits and rituals around our football day out that probably defy logic and sense. We could probably park somewhere more convenient. My commitment to my health and fitness at an intensive gym session on the morning of a home match is directly contradicted by the consumption of a potato and meat pie from Leavers bakery three hours later.

It becomes a pattern, a formation for the day. Something we expect and price in to the whole experience.

Similarly, I think our reactions have become deeply programmed as well: confusion about who is supposed to be playing where as the team emerges and takes shape; frustration with the referee who gives Bradley Dack too few decisions; an intake of breath as Christian Walton receives a back pass; a groan of irritation as a free kick in the opposition’s half is squandered into a series of pointless sideways passes and a fruitless punt upfield. And finally the bafflement at Tony Mowbray’s substitutions.

It was all of that and more yesterday. But if we have our rituals it sometimes seems the players and the manager have theirs; ultimately ending in an interview on BBC Radio Lancashire where Mowbray says he has been left “frustraaaaaaated”.

So it was expected to be yesterday when we conceded a bad goal with 5 minutes left on the clock. The heads go down, the fans go quiet, the away fans finally make some noise (almost as much as a tiny number of them did, disgracefully, during the minute’s silence for the war dead). Mowbray brings on 20 year old John Buckley - who I still think of as a nippy prospect for Signol Athletic in the Stockport Metro League under 14s - and I roar out: “what’s the point of that, Mowbray? Are you trying to destroy his confidence?”

But we never leave early. Despite all of what I’ve come to expect, all that is predictable and confirms our deep internal biases, football is beautiful because of what then followed. Rovers did come from behind to win a game by the same fine margins that could have seen it and many others go the wrong way.

You can attach a bigger meta narrative to everything that went on today, but all that it said to me was that against all my expectations, football is joyous because it can surprise us.

And though we might tweak any or all of the little things we do that contribute to a match day, the one thing we never do is leave early. We stay to the end. But not for the fireworks.
Posted by Michael Taylor at 9:16 am