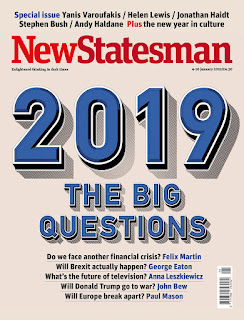 From an early age I've always had a magazine that I have consumed avidly and which pretty much defined my world.

At various times that dubious and fragile honour has fallen to the NME (mid-80s), New Society, Marxism Today, Arena, The Face, When Saturday Comes, Loaded, Monocle and The Word. In recent years I've drifted a bit, as I think magazines have.

In all of that time, I've dipped in and out of reading the New Statesman - particularly when it absorbed New Society in 1988, before erasing trace of it 8 years later. It sort of baked in my politics around the 1987 General Election, but I think it probably lost its edge when Labour were in power. At that time, I found The Spectator the better of the political weeklies.

Yet now I look forward to my regular Friday treat of the New Statesman. It’s not only really helpful for work, providing the best insights into British politics, but it’s also a great commentary on a really rich cultural hinterland.

The present editor Jason Cowley has been in the job for a decade. When he was announced I remember a rather snooty backlash against his appointment, given he was a bit of an outsider from the political commentariat and had been editing Observer Sport Monthly, before a relatively short stint at literary journal Granta. Yet it was pretty clear that he's proved those doubters wrong and taken the title in a really bold direction.

In the 2018 end of year edition, he talked about what his original plan was:

"Take the New Statesman upmarket; make it more politically sceptical and unpredictable; free it from the clutches of the Labour Party; publish longer and better-written pieces; burnish its literary pages; create a dynamic website; and discover and nurture a new generation of political writers."

What I think I appreciate more than anything is the careful blend of freshness and intellectual discomfort that it brings.

Of course it's a bit London-centric, all of our media is. I've spent a lifetime trying to do something about that, and I wish they'd make more of an effort. Having a conference on the Northern Powerhouse in Leeds in February is good. More, please.

But I don't think I've read a better series this year than Matthew Engel's tour of Europe. It proved hugely useful to us before our trip to Estonia and I really liked his last essay on train travel.

Kate Mossman, ex-The Word,  is a wonderfully deft culture writer and a perfect accompaniment as a columnist to Tracy Thorn. Having John Gray doing expansive moral philosophy pieces is a real coup. I always enjoy Anna Leszkiewicz's media columns, but her piece on the future of television was the best synthesis of the issues for the business, showing a real grasp of what lies behind the rise of Netflix and the challenge to the conventional TV channel model. I also think the political commentators Stephen Bush, George Eaton and Helen Lewis, all do a particularly good job of  providing steady, solid political commentary on the chaos of our failing system.

It's not just because I agree with everything. I'm at odds with Paul Mason on many things, but he does reserve his best strategic analysis pieces for this outlet than any other he writes for. I also welcome Grace Blakeley joining as an economics writer, because she reflects a particular thread of UK leftist thought that is at the  heart of the debate that has been opened up by Mason and Yanis Varoufakis.

The great skill of an editor is to curate a publishing space that can welcome new voices and nice surprises. There's a fairly high bar here, where the age ranges of the contributors give you a sense of a world observed from a wide perspective. I like seeing Howard Jacobson popping up as a reviewer and guest diarist alongside towering figures like Michael Heseltine, Gina Miller and Mike Brearley.

As well as the writing I enjoy the political podcasts with Helen and Stephen, while Jonn Elledge's CityMetric podcast has a marvellous geeky streak that I just adore. Whatever it is they do, you pretty much know there's a high standard of insight and commentary you come to expect. I even think they make a decent job of the advertorial supplements, which newspapers manage to make unreadable, whereas the NS ones are usually very useful.

When I used to lecture at UCLAN on the magazine journalism course, I used to emphasise the importance of knowing the reader, creating a clear personality of what the title is about and how it improves their life. As the editor of a business magazine group for twelve years I aspired to make our titles this relevant and with that single minded commitment to high quality. When you have writers, designers, sales staff and a publisher who share that vision, then you are on to a winner.

It's been a challenge for magazines to transition to digital and to keep on innovating with events and podcasts and other brand extensions, but I think they have everything at their disposal to do so.

Congratulations on 10 years Jason Cowley, you’ve done a top job.
Posted by Marpleleaf at 11:07 am