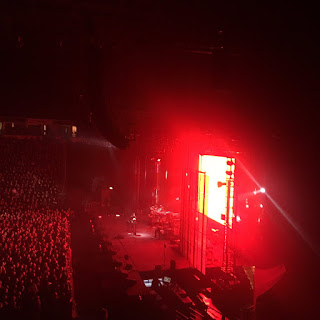 If you took all the different individual elements of Massive Attack’s live show at Manchester Arena tonight then it’s an enticing cocktail of music, artistic and ideological challenge. It’s why I forked out a ton for a couple of briefs. I didn’t think I’d get Banksy/3D spray painting a mural on the concourse, and I didn’t *really* expect I’d get Mezzanine from soup to nuts, even if it was billed as the 20 year anniversary tour. We didn’t get either, by the way. It wasn’t a shock, or a surprise, or a let down, but I’m wondering why I feel a bit flat after that. And really I shouldn’t.

First off, I’ve now heard and seen Elizabeth Fraser hit those notes at the peak of Teardrop. Second, I fell a little bit in love with Horace Andy, reggae legend, and possibly the only person on stage tonight who looked like he enjoyed himself. Fraser isn’t meant to, not if you sing Teardrop or Black Milk like you mean it. I expected a visual spectacle, there’s always been that element to Massive Attack’s whole pitch.

I’ve duly noted that they have worked with Adam Curtis before. I can sit through 3 hours of his mesmerising Hypernormalisation documentary and feel a bit numb. His film Bitter Lake had a similar effect, but as the backdrop to a couple of hours of spliced together video, knowing cynicism and Jenny Holzer stylised bursts of words the unsubtle attempts at messaging just left me infantilised, as did my teenage son, who assured me he won’t be donning a tinfoil hat in his student flat tonight.

I don’t love Massive Attack for their attitude or their charm, it’s possible even to forgive a lack of an encore, zero attempt to connect with the audience or the rigid set list. Possible even to pass over the £100 we paid (did I mention that?), because at times they were spectacular. That sound comes from here. Those bold cover versions of Velvet Underground, Cure and Ultravox, and that magical atmospheric grit they have crafted to painful precision.
Posted by Michael Taylor at 11:37 pm