The Manchester City Way - a culture of commitment? 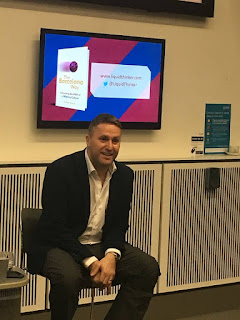 Damian Hughes came to speak at Manchester Metropolitan University recently and he was every bit as impressive as I've come to expect.

I've worked with him a few times, delivering client events for TSK and I've seen him speak here before. This was remarkable. His latest book focuses on one of the most successful sports teams of my lifetime, FC Barcelona.

At the heart of this success is "culture". As Damian said to the i newspaper: "As someone who has worked with a variety of elite sports teams and blue chip companies, I always seek to impress upon management the importance of culture. The results bear this out. Research suggests that culture can have as much as 22 per cent impact on performance. Pep Guardiola’s current boss, Manchester City chief executive Ferran Soriano, emphasised this point – 'culture is a crucial ingredient in all organisations' and is especially crucial at football clubs."

Guardiola's footballing style, his methods and his philosophy were formed when he was a player in Johan Cruyff’s Barcelona team, lifting the European Cup in 1992 at Wembley, a game I was fortunate to have been at.

As Damian says in the book: "Cruyff had his very own interpretation of what doing things the ‘Barcelona Way’ actually meant. It was centred around three trademark behaviours: humility, hard work and putting the team above your self-interest."

I'm going to do Damian a grave injustice in attempting to summarise a whole book stuffed full of stories, evidence and research, but he calls what was created at Barcelona an example of a commitment culture.

I've said before that Barcelona’s ‘more than a club’ irritates me, a little bit like the mysticism of the All Blacks, of which their Haka is a part. Both create the aura of semi-religious purity that so frequently they fail to live up to. But life would be duller without them, granted.

You start to think what other possible cultures any other winning team could adopt. Damian's book highlights five which apply in business and in sport, and from memory, in brackets, are where you might find examples of each one.

The Bureaucratic Culture – Where middle managers rule (the Moneyball approach, Liverpool under Brendan Rodgers and late period Arsenal under Wenger)

The Engineering Culture – Based on problem solving (Klopp at Dortmund, and now at Liverpool, maybe?)

The Commitment Culture – Getting employees to really buy in to what an organisation is trying to achieve.

I've become curious about what Guardiola is attempting to create here in Manchester, with City. The football they play is magical, based on movement and possession. They've definitely created a winning culture where excellence and preparation have produced outstanding results, but, let's not be coy about it, amidst a setting where money is no object.

I had all of this in mind when I went to the Etihad last night to watch City come from behind to beat Hoffenheim and top their Champions League group. The stand-out player was Leroy Sane, who was left out of Germany's World Cup squad. Also impressive was Phil Foden, who has emerged through the Academy and the great youth set-up at Reddish Vulcans Junior Football Club. Both examples of hard working, humble players who do it for the team.

Damian makes the argument that the foundation of the team at City has obvious parallels with what Pep did at Barcelona – "he quickly dispensed with Joe Hart and Samir Nasri and allowed an ageing Yaya Touré to drift to the fringes of the first team, whilst allowing the humble Kevin De Bruyne, quick-witted David Silva and the selfless Fernandinho to emerge as key figures within the dressing room."

On the back of reading Damian's book I lapped up the Amazon Prime series, All or Nothing. In different ways it told me everything and nothing. For all the claims that it is an access-all-areas and unexpurgated insight behind the scenes it is actually City's tightly controlled commercial exposition of what they want the rest of us to think of them.  As Simon Hattenstone said in his review in the Guardian: "For in the end, this is nothing but a gloriously glossy commercial for Manchester City – a great big blowy for the club from run-down Kippax Street determined to become the world’s leading football brand." And that, in a way, tells you more about humility and culture. So I think there's some real hard traces of all of the above cultures at work in the Manchester City Way.

Much as City have built a team and created stars of real quality, forged around a commitment culture, they have used engineering and bureaucracy to source a tier of superstar. And it was Yaya Toure who rather brutally laid the charge that Pep is an autocrat in the way he enforces his FIFO culture.

To come back full circle to Damian's point about culture, it is always an aspiration. Performances dip, things go wrong. It is a touchstone, a guide, defined as much by what is included as by what is left out. For the moment, it's for football fans to savour the potential of City coming up against Barcelona in the final in Madrid in June 2019.

Posted by Marpleleaf at 5:00 pm