Marple at the thin end of a GM wedge 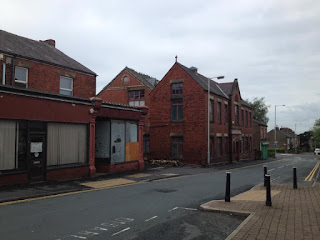 There's a lot I love about living in Marple. It's friendly, convenient, relatively safe, there's a lot of people very committed to making the community better.

Maybe it's a positive sign that there has been an outpouring of outrage that an old school building will be demolished to make way for apartments.

Aesthetics are important, especially as they represent a link to the past. People care about the physical environment and good quality architecture. Hopefully it guides better decision making about what is acceptable in the future.

Some people at Manchester Metropolitan University who I help out have been doing some very serious work about how a place redefines itself. There's a glimpse of the work of Professor Cathy Parker and Steve Millington and their work here, Five Ways to Save Britain's High Streets. It's not particular to this country though, all over the world, there is a debate raging which is about one thing, shops, but should actually be about something else entirely, land and how we use it.

This issue has become the thin end of a very large wedge; that is, what we do in Marple is but a part of a bigger picture in Greater Manchester.

Flawed though the application for this building is - another retail unit??? - it does meet the requirement for 'brownfield first' that concentrates the minds of the councillors on the planning committee and the planning department, trying to follow complex rules.

Two things can and should clarify those rules, one here in Marple, the other at a GM level, which in turn is heavily influenced by central government.

First, I'm not a town planner, but to me it's fairly obvious that like many areas Marple suffers from poor traffic flows, a struggling central core and a sense of purpose. I like how Marple's Neighbourhood Plan has tried to take a long view on these issues, though the questionnaire rather leads the witness on some issues. But at least it looks up and onwards at the trends that shape our world: an ageing population, a lack of property alternatives for retirees to downsize to, a different kind of demographic and what they might require from shared civic spaces.

Change takes time, and much as it seems unrelated, a high priority should be a high frequency train service to Manchester and a line to Stockport, even if it looped through Guide Bridge and Denton. More than anything else that could ameliorate many of the other issues of overcrowding and air quality.

The second is the Greater Manchester Spatial Framework, which I'm frustrated to see is stuck in the weeds. It needs all ten council leaders and the Mayor to support it. Bolton is on a bit of a knife edge, but the others are stacking up behind it and Andy Burnham looks like he's getting the rewrite he wanted. But Stockport's Labour leader Alex Ganotis has said he won't support the plan if a majority on the Council don't. Given it is under tentative minority Labour control, there's a real chance that it will eventually be sunk in this very area. In order for it to get through in Stockport would require a dialling down of the plans to build extensively in High Lane and Woodford, despite the opening of the new Airport road. In turn that may make it hard to swallow for leaders in other boroughs trying to sell it locally.

Even if it did, I still can’t see it getting support from a majority of members in Stockport. There is too much political advantage to be gained by Liberal Democrats and the very strong NIMBY voice will sway the Tory councillors at the southern fringes. Some concessions on numbers would be basic common sense, especially as the assumptions keep shifting. But all of this work, all of this vision, all of this serious attempt to address land needs of a future economy will be scuppered right here in SK6.

The irony of course is that without rules, without a plan, without a strategy for what an area requires, there will be a planning free-for-all. And when that's the case, there'll be even more isolated and opportunistic developments like this one.
Posted by Michael Taylor at 4:54 pm