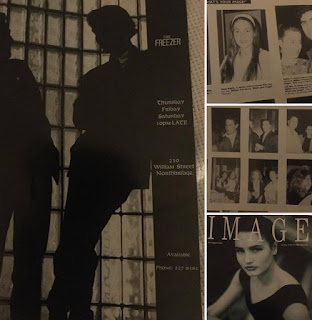 I'm seeing a mate from Australia next week so found myself sifting through a magazine I edited over there in the 1980s.

And as I promote and hustle to get people to come to an event on how our cities stay exciting and fresh and vibrant, I'm taken back to those days.

Towards the end of my time there I worked for a bar/club called The Freezer in downtown Perth, doing the PR, working the door and even appearing in an advert.

They were great times. But my best memory of working front of house was a couple of old Aussie rockers bowling up and asking what time the band were on. When told that the "Wayne Lewis" on the poster was a DJ they said they weren’t paying five bucks to listen to some guy playing records and could do that in their living room. Jog on, lads.

I learnt a lot then about network marketing, the importance of opinion formers and the wisdom of crowds. Creating events that have that sense of jeopardy, that things are going to happen, that you don't want to miss out on. It mustn't be a call to a passive experience, but an active one.

We created demand for places by attracting and exciting the people who created energy and ideas.

So when I tell you that we've got a great guest list for you to come and discuss with Nick Johnson - who might reveal how he animated Alty Market and the Mackie Mayor market hall - then you're going to want to come along aren't you?

It's after work on the 12th of July at Manchester Met University, register here.
Posted by Marpleleaf at 10:57 am