Chris Brookmyre's Want You Gone, a stormer of a book 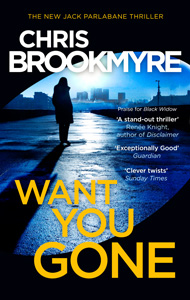 I've just read my favourite novel of the year so far, Chris Brookmyre's Want You Gone, or in the US the far better title The Last Hack. It's the sixth Brookmyre I've read that features journalist Jack Parlabane and is a terrific progression of how he's developed as a writer and observer of a fast changing world.

There seems to be a move into hard-boiled crime fiction by a wide range of male writers over the last few years. I've enjoyed Tony Parsons' latest series of Max Wolfe books, good stories, strong adversaries, and a good twist on his empathetic single Dad genre. I suspect that in another age a writer of the sensitivity and capability of Joseph Knox may have attempted a more literary state of the nation debut novel, but Sirens was as gritty and dark as they come.

I've enjoyed discovering Brookmyre this year and have resolutely ploughed through the Parlabane novels in chronological order, attempting to get to know errant journalist better by the book. Truth be told, he's not easy to get to know, or like, sometimes. I've enjoyed viewing all manner of Scottish life through his lens - Edinburgh society, the press, the Tory establishment, then the Labour one that followed, the medical fraternity. As you'd expect from a former journalist, he has a good eye for a new milieu and a fine ear for speech. I'd run out of Parlabane stories and no sooner had I finished Be My Enemy, that friends at work got me Black Widow and Want You Gone. The transition in his story structure and writing style has been remarkable. No less observant, but far darker and more urgent. Not without lighter moments and laughs, but far less of the quirky scatalogical humour that seems to have reached a peak with Be My Enemy. It all runs in parallel to Parlabane's status shifting from super star hack picking his assignments to him hustling to 25-year old editors on a fading reputation as the world changes around him.

Want You Gone is a masterpiece in modern crime noir and would easily make a Hollywood blockbuster; bang up to date with the Dark Web, Cyber attacks, Fake News and old criminals still up to the same shifty games.
Posted by Michael Taylor at 6:55 pm